Make an entry in your calendar, don't just write it on your hand: Open Tech Will Save Us is back for a third edition!
Next Wednesday, 10th June 2020!

In terms of Spec Core Team MSC focus for this week, we've still got MSC2366 (verification flows) on our plate, but we're removing MSC2399 (UISI messaging) as it just needs one more final tick. We're adding MSC2403 (knocking) in its place. 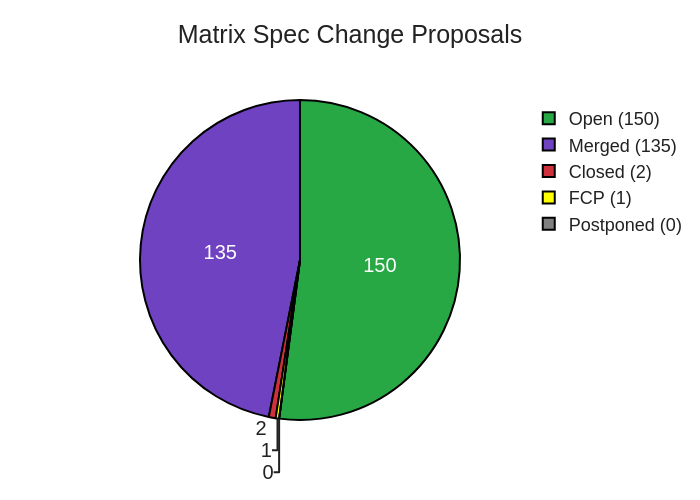 Mascarene is a quite new homeserver implementation project started a few months ago. Now it's time to introduce it.

Mascarene is written in Scala, runs on JVM and relies on Akka actor model. Out of the box it provides features like efficient streaming I/O, clustering and live data distribution. Data are backed in a PostgreSQL database.

The project is in early stage but already provides a few endpoints which make Mascarene able to talk to Riot.

You can test it at https://snapshot.mascarene.org. You should be able to register, login, create a room and talk to yourself.

Contributions are welcome, join us on #mascarene:beerfactory.org

Welcome back! This week I went through the whole Client-Server API and wrote down everything that is still missing from Conduit. You can find issues for all of them in the milestone for Conduit 1.0. This should make it more easy for contributors to find something to work on and gives a lot more structure to the repo (maybe I also did it, because it's so satisfying to close issues and see the milestone percentage go up 😛).

Some of the issues I could already close this week include:

As you can tell, a lot of work is starting to go into smaller improvements, which is a good thing, because it means most of the core work is already done!

Thanks to my supporters on Liberapay (Take a look, I improved it 🙂).

This week in Synapse land we have been focusing on bug fixes especially SSO and soft logout.

We also spent some time thinking about how to further improve performance for large scale deployments (like matrix.org). In short this will mean sharding contested workers such as the media repo worker, the federation sender and the federation reader. We also want to remove some more functionality from the master process because it is still sitting at about 80% and we’d like some more head room. We'd also like to fix up the state compressor so it can easily be run as a background progress to save on disk space, this will benefit all installations big and small. Finally we want to speed up joins over federation. Exciting times.

Next week, more of the same and we should start on some of the perf items. Also look out for changes to notification defaults.

In other news, Kegan wrote a post on how p2p.riot.im works, including Dendrite's journey to SQLite and WebAssembly!

Additionally! You may have already read about v0.1.1 of the P2P Matrix demo - this is a big update, with local storage, room alias handling, federation improvements and more!

My Matrix Appservice Minecraft bridge is now in beta

Here is our Matrix room #minecraft:dhdf.dev 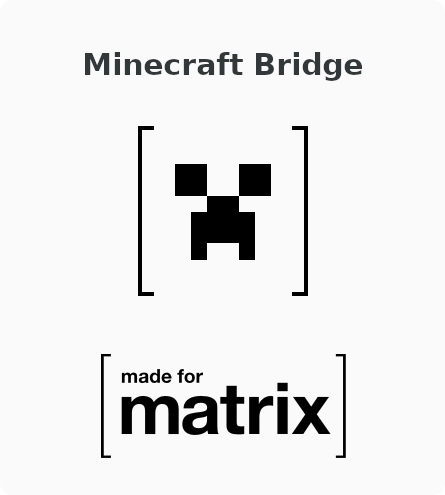 Tuple is a very early simple matrix <--> mqtt bridge for IOT and other embedded devices.

It's my very first golang project, but it works(TM).

This is exciting! I would love to see more IoT-related projects!

mautrix-hangouts can also do backfilling now, both when creating portal and missed messages when connecting

mautrix-facebook got support for backfilling history when creating portals and backfilling missed messages when connecting. There's also an option to periodically reconnect to potentially fix the bug where Facebook decides that you don't get messages anymore, but doesn't actually disconnect you.

I had apparently forgotten to implement bridge information in the whatsapp bridge when I implemented it in my other bridges, but that mistake is now corrected. I also fixed a bug with encryption where it would generate too many one-time keys and cause messages to be undecryptable. Finally, mautrix-whatsapp had its first release this week since it's working reasonably well now.

Eager to test the keytar feature (pickle key stored in OS secret storage) with Riot Web? Support landed in radical-native v0.1beta13, which uses Rust keytar bindings under the hood. Testing requires the latest and greatest of Riot Web, so riot.im/develop might be the place to see it in action

Keytar support is a very very new feature, uhoreg, who has been working on it in the shadows and wasn't expecting to see it land yet, commented:

Pattle is a client written for Flutter using Dart

A new version has been made available and will become available on Google Play and TestFlight!

⚠️ If you're not logged out, it's recommend that you logout and additionally clear your data after installing the new version! ⚠️

RiotX v0.21.0 has been released on May 28th. It adds support to identity server configuration and e-mail/phone binding and unbinding. It's also now possible to switch between languages inside the app and to display the list of attachments (media and file) of a room. A new setting has been also added to hide redacted (deleted) events in the timeline. As Riot-Android SAS v2 is also included in this release. Also formatted_body for m.notice and m.emote are now taken into account.

This week we were still working on implementing VoIP (audio and video call). Support for integration manager, widgets and sending stickers has been merged to develop. Many new features are coming soon, stay tuned!

Riot-Android: Version 0.9.12 has been released on May 20th. I forgot to mention it the TWIM of last week. It contains a fix for favorite rooms vanishing and also the SAS v2 implementation (new key agreement method).

Mirage 0.5.1 has been released today:

This week, we finalised our work around the iOS13 SDK. The coming public TestFlight (0.12.2) is the result of this work. It comes with a lot of changes including a full rewrite of the push handling codebase, trying to find solutions to make matrix e2ee compatible with iOS Notification Service Extension. Most of these changes are unfortunately invisible for end users. Please report any issues. Note this is safe to switch between this TF and 0.11.5.

In parallel, we started to implement the cross-signing bootstrap and the recovery management. The UX of this is going to be refined on Riot-Web and RiotX-Android. Riot-iOS will implement the refined UX directly.

A glossy Matrix collaboration client for the web. https://riot.im

We had several Riot Web releases this week, first with 1.6.3:

This was quickly followed by 1.6.4 to fix a few regressions with dismissing toasts, compact timeline layout, key backup, and tooltips on scroll.

This will be in effect until 1.0 (or a bit before). If needed, make a backup between every minor version bump.

Get it on pub!

Safe Support Chat, previously known as OCRCC Chatbox, now has a website with guides on how to set it up for organisations: https://www.safesupport.chat/

For context, Safe Support Chat is an embeddable chatbox built on Matrix with cool features such as end-to-end encryption support to enable individuals to seek support with organisations that provide it. It was initially built for the OCRCC (Ontario Coalition of Rape Crisis Centres) in order to allow survivors of sexual violence to communicate and seek help safely with OCRCC facilitators.

Kim Allen of Primal Glow Communications, one of the parties involved in Safe Support Chat's development, also recorded a podcast with Nomadic Labs about this project: https://podcast.nomadiclabs.ca/episodes/the-adventure-of-building-an-open-source-chatbox

Thanks to benkuly's efforts, matrix-docker-ansible-deploy now supports bridging to SMS (with one telephone number only) via matrix-sms-bridge.

A new version of the terminal-based federation tester has been released. The current version 1.11 should now cover the entire server discovery process including scenarios with a .well-known configuration without a port, but with a DNS SRV entry.

The script relies on bash, curl, jq and openssl. It has been tested on linux but should also work on *bsd and macos.

The script can be downloaded here:

(The message about the latest version will always be pinned)

Hi, I've build FLAP to help other self-host multiple free softwares. FLAP can currently help you to easily setup Synapse, Riot, Nextcloud, SOGo and Jitsi all with SSO and low maintenance needs. Feel free to give it a try !

Announcing Matrix Bot (name is a work in progress)

The first "official" release of matrix bot has been made and you can find the latest release source at https://github.com/sparky8251/matrix-bot/tree/v1.0.0

It's flagship features are currently

There are plans to enable group pings, get a help command that can be limited to function only in a specific room, and more in the works so be sure to check back soon!

matrix-reminder-bot bot to remind you about things. Supports reminding an individual in a room or the whole room itself. Also supports setting alarms, which will continue to sound periodically until silenced.

There are bounties to be had! AU$500 to support Emoji Reactions in Fractal, for reference this is tracked on the GNOME gitlab.

We didn't hear from Spectral too recently, but there are signs of code being written.

For those who Hubzilla or Zap or ActivityPub or Friendica or Diaspora, there is now a Hubzilla forum for all things Matrix: https://elsmussols.net/channel/matrix

Firstly... 🏃‍♀️
Matrix Live 🎙
Dept of Spec 📜
Dept of Servers 🏢
Dept of Bridges 🌉
Dept of Clients 📱
Dept of SDKs and Frameworks 🧰
Dept of Interesting Projects 🛰
Dept of Ops 🛠
Dept of Bots 🤖
Dept of Ping 🏓
Final Thoughts 💭
That's all I know 🏁