Thanks and congratulations to Sorunome this week for releasing a new guide: Implementing more advanced e2ee features, such as cross-signing. This is a hugely detailed guide detailing the necessary steps to enable Cross-Signing and verification. Thanks as well to uhoreg and poljar for their work in reviewing the text!

I wrote a master thesis that tries to create e2e encryption based on Ethereum on top of Matrix. It may not solve all problems but it's an interesting experiment

I didn't get to look at this yet but it's exciting!

kitsune (guess who's back!?) said:

I have put the long-awaited MSC2312 out of WIP - this is about matrix: URIs in case you haven't heard - and it's already in active discussion at #uri-scheme-proposal:matrix.org! Join the fun to make it the most awesome! The upcoming Quotient 0.6 has an implementation of those so adventurous Quaternion users can start experimenting right away.

In terms of Spec Core Team MSC focus, we've reduced last week's list of 5 MSCs down to one, MSC2674 (aggregations part 1: relationships). Next week, we're going to focus entirely on that MSC to make some headway on finally getting aggregations into the spec. 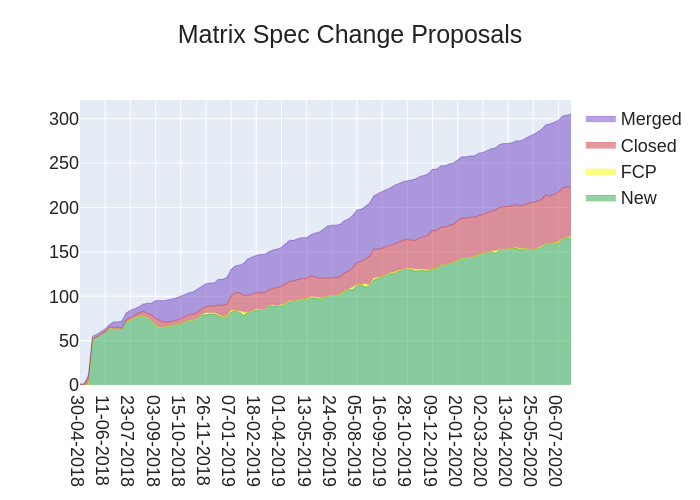 For the GSoC project HTML embeddable Matrix client this week:

The P2P Yggdrasil iOS demo has seen some improvements:

In addition, there has been much work getting Dendrite to support E2E rooms, which it now mostly does.

You can create and join E2E rooms and have a conversation locally, though there's issues with it over federation. In addition, Dendrite currently lacks device lists so adding new devices may result in unable-to-decrypt errors:

Spec compliance is up from last week:

Doesn't it feel like we'll be using Dendrite in the wild really soon now?

Another quiet week. Next week should be more exciting again.

This week we continued on our async/await athon, you can track progress here, expect steady progress over the coming weeks.

We dusted off the notifications project working with our pals in the Element client teams to ensure that the push rule defaults make sense. On the flip side we made further improvements to Sygnal and will merge the ability to have it sit behind a proxy rsn.

We are also trying to figure out how media retention limits should work in Synapse.

Up next is to continue our performance push. We need to spend time between pulling things off the master process as well sharding the event persister. We will continue with notifications and maybe finally squash https://github.com/matrix-org/synapse/issues/2528

Hello people. It's been a while since I've talked about a new bridge...or actually any bridges. Fear not, now you can hear both! Today I'm announcing the birth of another project matrix-figma. Figma is an online collaborative design tool. It was created to scratch an itch with the Element design team, who wanted to see comments appear in their Matrix rooms in realtime when someone commented on a Figma file.

The bridge works by first joining it to an "admin room", which functions as a permitted user list. The bot can then be invited to any other room so long as the invitee is in that admin room, and can then ask the bot to start directing comment notifications into the room.

The room uses room state to hold configuration, so you can host the bot as a docker container anywhere without the need for any support files!

I can announce that the bridge is now functional for simple use cases such as these, with more interesting functionality in the future.

Please check out https://github.com/Half-Shot/matrix-figma to see if the bridge is right for you :)

I opened a PR for https://github.com/Awesome-Technologies/slack-matrix-migration, which makes it compatible with recent Synapse versions and adds new config options allowing to effectively import a Slack workspace history to an existing homeserver via federation.

This Python project was initially intended for a full migration from Slack to a new Matrix homeserver and allows reusing the imported user accounts. We have some research groups using Slack that would like to import their Slack workspace history to our Matrix homeserver. This PR allows to import a (free) Slack export to a fresh and empty Synapse instance that is federated with our main homeserver. We do not need a full "migration": we kick all imported users and invite the existing Matrix users from our homeserver.

Two groups already imported the history and switched to Matrix, one more is in queue and probably more to come.

This is a really, really exciting development, and the context for which Sven is expecting to use it is BIG, I can't wait til we can share more about it!

The Twitter DM bridge I announced last week mostly works now. It does text and reaction bridging in both directions, twitter->matrix media bridging, end-to-bridge encryption and backfilling. I also added support for it in mautrix-manager for web-based login.

If it mostly works, I guess it's time to mostly start trying it out!

Fluffy 0.16.0 has been released! It is already available on F-Droid, Google Play and IOS Testflight will follow. You can also try it out in the webbrowser. Visit https://fluffychat.im

Last week, we forgot to announce that we renamed the Riot-iOS app to Element but this is not a surprise anymore. The app version is now 1.0.0. This change came with a lot of UI tweaks like new icons and new colors.

Since then, we made bug fixes we will release soon. This week, we also worked on PIN protection for the app, including support of Touch ID and Face ID.

This week has been focused on bug fixing, there will be a release next week. We also started to work on PIN protection for the app.

Quotient 0.6 released! The release notes are somewhat long, since it's been 4 months since the last stable version update, and more than a year since the 0.5 release - thanking two heros of this release, and giving a nod to the original Quaternion author who happened to contribute using an inverted time machine. Read here: https://github.com/quotient-im/libQuotient/releases/tag/0.6.0

Big news - first release in a year. Do take a look at the full notes, they're very readable. In particular, they call out contributions from Black Hat, Alexey Andreyev and the original project creator, Felix Rohrbach aka @fxrh.

We weren't in TWIM for a while, but that doesn't mean no progress! Apart from Devin's constant work on ruma-events, there was also some movement in ruma-identifiers and ruma-client-api, with the former seeing a new release, 0.17.0.

We're planning to do more releases next week, and hopefully a 0.1 release of the ruma crate that provides a simpler entry point by re-exporting everything else, in one of the weeks after that. Stay tuned!

See our Setting up matrix-reminder-bot documentation to get started.

See our Setting up Synapse Admin documentation to get started.

It's been a while since it's come up, but matrix-wug is a bot capable of transcribing characters writable via normal keyboards to scripts from other languages/notation systems

Now it also supports hiragana! The romanization system is something like Wāpuro rōmaji, but sticks to Nihon-shiki when in doubt.

I want this transcription to be forgiving, so if you find it not transcribing something in a way you'd expect it to, feel free to DM me!

If you need to convert swiggles into a different type of swiggle, dandellion has you covered here.

This bot is not about adapting the current jitsi integration provided by Element IM as widget.

If you have a configured jitsi server to be authenticated with jwt tokens as in https://github.com/jitsi/lib-jitsi-meet/blob/master/doc/tokens.md , this bot will assist you when claiming for a jwt instead of going to jwt.io each time. You'll need to create a user and invite you in each room where you want to create a jitsi room url respecting the matrix power levels in the room.

When the service is running invite the bot and send message !jitsi-jwt

If you are a moderator in the room (alias you have enough power levels to redact messages), then you will get a direct message from bot with the url to jitsi room with the jwt get parameter.

New cody release. @cody:bordum.dk is a chat bot that works as a REPL for your matrix rooms. This week I worked on metrics. I host a Grafana instance with anonymous access allowed, so codys charts are now embedded the #cody:bordum.dk chat room.

I am proud to announce the very first release of sMythbot, the Matrix chatbot designed to control your Myth Tv DVR remotely. This release should be considered a tech preview. I welcome feedback and Bug reports. More information on installation and setup is available in the project wiki.

It currently supports the following commands

You can find out more information at my Github Page

I love a project designed to scratch the author's own itch!

Noteworthy Elements is a lightweight shim powered by the Ionic Framework thats goal is to bring first-class support for Element running on mobile devices.

What we have so far

Our initial experimentation has been positive and our goal is to make Element the best mobile client for Matrix with minimal fuss. With minimal changes to Element's codebase our goal is to land (significantly better) support for mobile web in upstream Element. Join us over at #noteworthy:tincan.community to get involved! 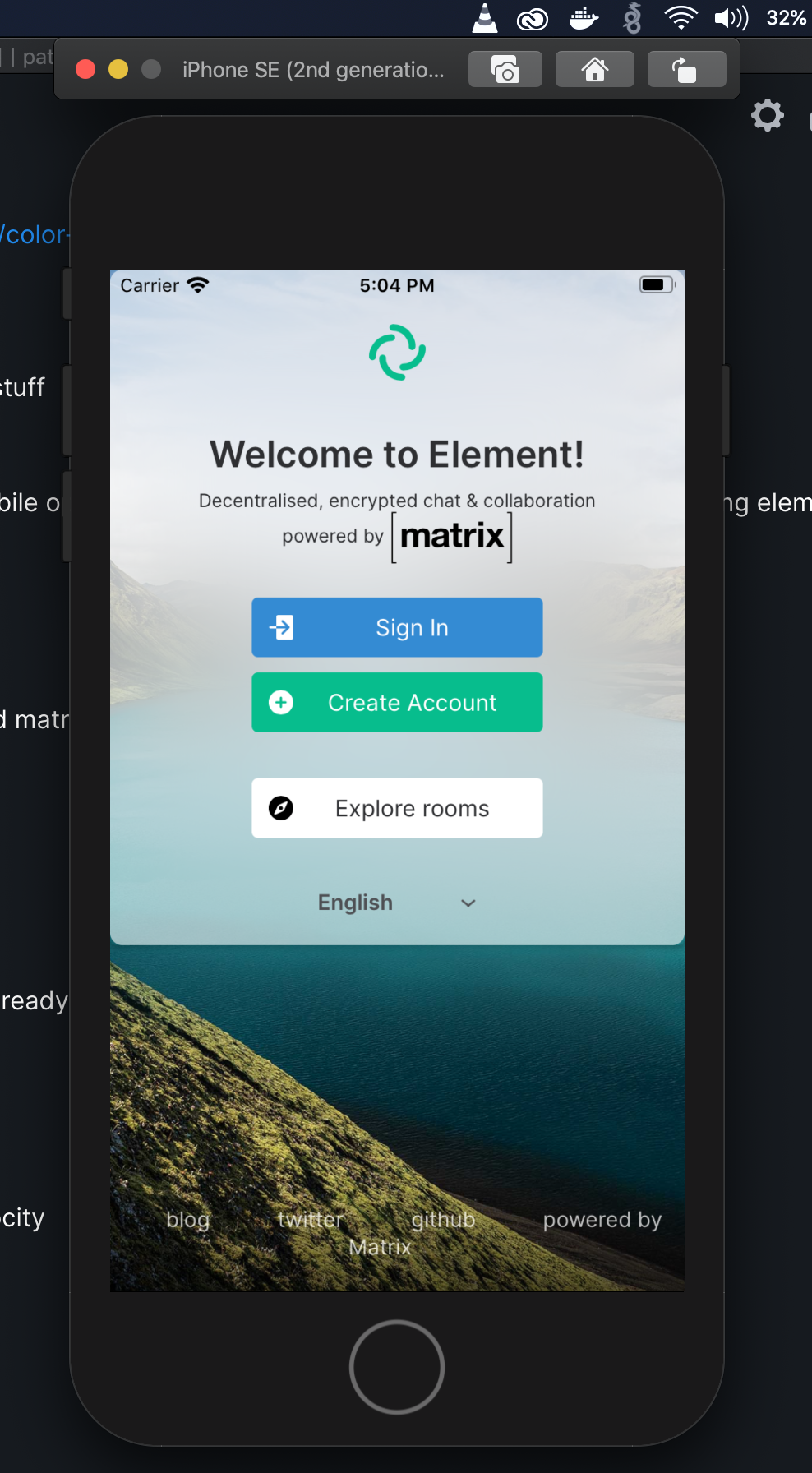 I just stumbled over the master thesis TrustNet: Trust-based Moderation Using Distributed Chat Systems for Transitive Trust Propagation. While it is mainly targeted at systems like Secure Scuttlebut and Cabal, I think it is also of interest for the people thinking about trust-based moderation for Matrix.