TechRadar have published a fairly thorough Element secure messenger review. This covers the Web, Android and iOS clients, and appears to use the matrix.org server for signup.

The review is very positive, awarding 4.5/5, and concludes:

The Element messenger platform scores highly for its approach to security and its commitment to decentralization, and it's definitely going to be of interest to businesses wanting control over their own chats – as well as plenty of individual users as well.

In terms of Spec Core Team MSC focus for this week, MSC1960 has made it into FCP, so this week our focus is MSC2414. 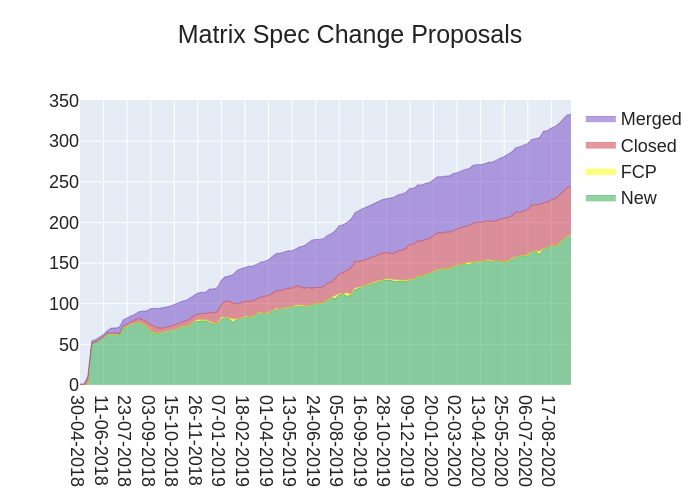 This week we put out two point releases to fix critical bugs. At the very least ensure that you have upgraded to 1.19.2 which is a security release but you may as well go the whole hog and upgrade to the hot off the press 1.19.3. We will release 1.20.0 early next week.

Aside from that we continue to work on performance analysis and the sharding of the event persister continues - it’s proving to be a really tough job but we are getting there. We’ve also been making progress on the room knocking implementation

This week we say goodbye to Oliver (reivilibre) as a leaving present he fixed a long standing bug that prevented servers catching up after a federating outage and as we speak is furiously trying to finish a service to test TURN configuration. Thanks Oliver!

Not much has happened this week, as the Dendrite team have been taking some time off. However, we still have a couple of changes to report:

Spec compliance is on the up:

Welcome back! This week we made some groundbreaking progress - this is not a joke, we found a bug in Synapse while breaking multiple Matrix rooms, causing the Matrix team a lot of unnecessary stress. Let me explain: The good news is that Conduit is starting to federate now. This means that you should be able to join all public rooms of the Matrix network and exchange messages. Note that Conduit does not do all the checks it should be doing yet making it stop sending messages from time to time as well as that advanced features like loading the history, syncing temporary data like read receipts or accepting invites are not implemented yet.

The bad news is that, while Synapse is happy to accept Conduit's messages when it is already part of the room, joining into one of the rooms Conduit servers are part of didn't work because of an event validation bug. The Matrix team did an excellent job at fixing this bug and releasing a Synapse patch the same day, but the damage has been done making a few rooms inaccessible to old Synapse servers. Thanks to everyone who supports me on "Liberapay" (https://liberapay.com/timokoesters) or Bitcoin!

Element Web integration had been updated to 1.7.5 (1.7.7 available in branch testing)

Both image tags and a new chart version are hereby pushed for 1.19.2 for my Synapse image and Helm chart

Just pushed the updates for the K8s-optimized Synapse image and chart for 1.19.3

Hey bridge developer enthusiasts! Myself and ChristianP (bridge crew of matrix.org) have been working hard on freshening up the matrix-appservice-bridge library. It's no secret that it was using "classic" Javascript rather than ES6 syntax, was poorly documented in places and there were no types at all to make use of.

But that's all changed now, the 2.0.0-rc1 release brings fresh types, new convienence methods, a total swichover from Bluebird Promises to native Promises and much much more. If you are looking to quickly get set up writing bridges, it's never been easier.

Check out the slack-starter project to get your first taste of bridge excellence and see what you think.

As this is an RC, feedback is valuable and logging bugs helps us all. Please do so if you encounter any issues 😄

The feature will be a simple config toggle, so existing bridges will have to do very little work to support it.

The first phase plans to use Pantalaimon with bridge users syncing like real users, but eventually the hope is that this will be all built into the library. Come check out this issue to keep track of progress.

0.6.3 and 0.6.4 were released this week, and I'm now working on desktop notifications support and push rules control.

Element Android 1.0.7 has been released (still stuck in Google pipes writting those lines), and will be quickly followed by 1.0.8 to fix a problem with cross signing verification.

We are working to implement search of messages in a room and we keep on fighting bugs and improving performance of the application.

We are also iterating on the home screen, to improve user experience, and try to satisfy users with a few rooms as well as users with several hundreds of rooms.

This week, we released 1.0.12 with several bug fixes including the one for background crashes due to PushKit

Released 0.037 on Monday with some polish for E2EE:

The rest of the week was implementing session backup, which I hoped would be ready to release today but it needs some more polish unfortunately. In the meantime, here's a GIF teaser:

Thank you to Krille, who told us:

FluffyChat version 0.18.0 is out now in F-Droid, Testflight and soon the PlayStore:

Hemppa the bot is a multi-purpose Matrix bot for writing new functionality easily with Python.

Hemppa gained a small but big feature for making fediverse better: per-room Mastodon tooting support. This means that you can set up a Mastodon account in your room and anyone with moderator rights can toot to that account. This way you and your roommates can super easily send toots to the world directly from Matrix. Mastodon (unlike the big alternative) supports RSS feeds out of the box so it's very easy to subscribe to users and hashtags with stock RSS bot. Toot #hemppathebot if you like it! Another new contribution worth mentioning is welcome which can send welcome messages to users registering on the server or joining a room. https://github.com/vranki/hemppa

Another week, another Ruby SDK release. This time adding a little fix to avoid duplicate state events being passed twice to the application if identical ones arrive in both state and timeline, also adds a global state event handler and moves room event handling to not depend on room instances themselves.

Asked how much the SDK is used in production, Ananace said:

a little, we've hooked Matrix into our server orchestration / configuration management system TheForeman - which is a Rails application. Also got a colleague who's doing a bot to linkify internal ticket IDs.

Thanks to @q-b and @jtescher we have implemented more of the federation endpoints (bringing us up to about 85% completion) and every (one) endpoint of the Push Gateway API!

We fixed a bug where federation endpoints expected access tokens instead of server signatures for authentication. In the future, we may add an API that requires signatures on requests.

Finally, we've also continued progress on the non-exhaustive type updates for backwards compatibility; we expect to finish this within the coming weeks.

v0.2.0 of matrix-reminder-bot has been released! This releases includes lots of bugfixes, updates and polishing. Find the list below:

Additionally, the minimum Python version is now 3.6. matrix-reminder-bot is made with nio-template.

Normally the ping shows how long other servers take to receive the sending-server's message. Some servers receive it quickly, some take hours. All this flows into the statistic of the sending server. I wrote a small program that's the other way around. Instead of measuring the sending-server's ping, it associates each measurement with an echo-bot (instead of the sending server), so this plot shows which maubots are the fastest to respond (it's probably not accurate at all, because most of the pings were started on conduit servers this week, but it's interesting nevertheless):