Don't be mistaken by the rather empty list above, there were many PRs to the contents of the spec flying around this week! These include some further contributions from lukaslihotzki, some clarifications from dkasak and some spec contributions and tooling documentation additions from richvdh. Also a clarification from uhoreg.

Thank you to everyone for your PRs!

Otherwise, there has been a small amount of activity across the spectrum of MSCs this week. One MSC to call out is https://github.com/matrix-org/matrix-doc/pull/3283, which could do with some more input from the wider community.

Random MSC of the week

And finally, something fun. I've written a small script to pick a random MSC that people may or may not want to have a look at.

Have a look if you haven't already, or take another look again if you have 😀 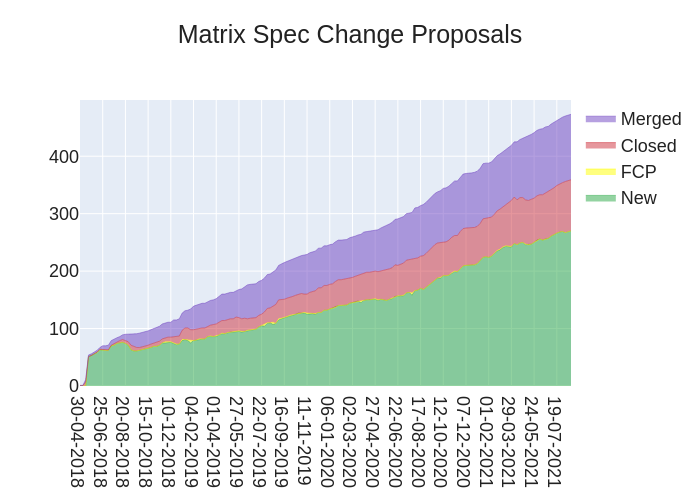 This week, we tagged the v0.5.0 release candidate, which contains two major advancements on the encryption front: support for server-side key backups and support for cross-signing. The addition of these features makes Dendrite significantly more user-friendly, as it is now possible to log out or share keys across devices without losing your conversations.

We'll be aiming to finalise this release next week. Stay tuned in #dendrite:matrix.org for more details.

Those sytest numbers!! Might be time to start playing with dendrite?

We are on track to release Synapse 1.41 next week. This version will use an unstable property proposed by MSC3244: Room version capabilities to advertise to clients that they may create restricted rooms using Room Version 8, despite the default room version remaining at 6 for the time being.

This strikes a balance between the broad compatibility of an older default room version, while still making newer features available when requested at room creation time. However, from next week you are more likely to encounter v8 rooms, so please do ensure your homeserver is running at least 1.40.

I'd also like to tip my hat to Element employee Olivier, who has put in the work to ensure that tagged Sygnal releases are automatically built and uploaded to Docker Hub via GitHub Actions. Thanks, Olivier!

This week too sees updates to my Helm Charts, with element-web being bumped to 1.8.0 - and then subsequently 1.8.1

Heisenbridge is now considered stable and v1.0.0 has been released! 🍻 🥳

Focus is shifting to v2.0.0 which will be a major refactor. The 1.x series will at least receive bug fixes if not features. Do note that if you are using the master branch or latest tag for Docker it may cause a breaking change in the future when the work starts being merged. Highly suggest moving to version tags regardless of the deployment method. If you are using matrix-docker-ansible-deploy it has been updated to v1.0.0 as of writing so pulling the latest master there is advised.

This week brought the release of 0.30.0, which includes

matrix-appservice-bridge 3.0.0 is now in RC

If the car wasn't enough, I bring more news! Our matrix.org bridge library, matrix-appservice-bridge has had a total shakeup. Version 3.0.0-rc1 is out and with it comes the migration from the matrix-js-sdk to the matrix-bot-sdk. This is a massive change underneath that should result in faster performance, better typings and hopefully lower memory footprints too.

I'd encourage everyone using this library to update and see how well it works for you! The IRC and Gitter bridges have already experimented with this change and have seen good results, so I look forward to hearing feedback :)

Kai was on fire this week 🔥 with 5 (❗️) new merge requests that all landed! The highlights are that rooms are now sorted by activity and room members now have a power-level property. The other ones (!815, !816, !817) are maintenance and code quality related.

Shout out to Julian Sparber, who’s still busy with his upstream work in the Rust SDK, and managed to review and merge all the above contributions.

This week, I released Sailtrix v1.3 on OpenRepos. 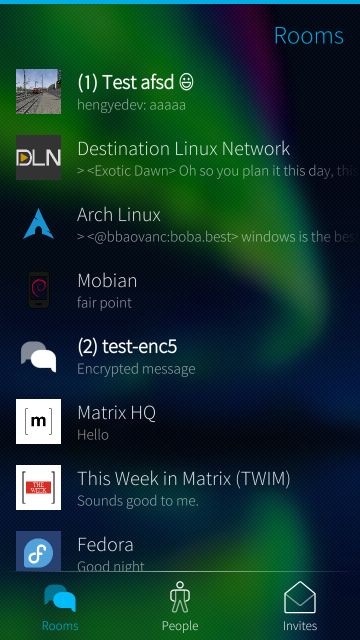 This week Janet improved receiving files in NeoChat. Now downloading a file can be stopped, a file type icon is displayed and it looks better! Other than that Felipe Kinoshita made some small visual improvements to the day separator in the timeline and Tobias continued working on E2EE inside Quotient.

Tomorrow Tobias and I will be doing a small presentation/demo of NeoChat at frOSCon in German. It's online so you don't have any excuse to not watch it: https://programm.froscon.de/2021/events/2711.html

Phew, that was a mouthful. 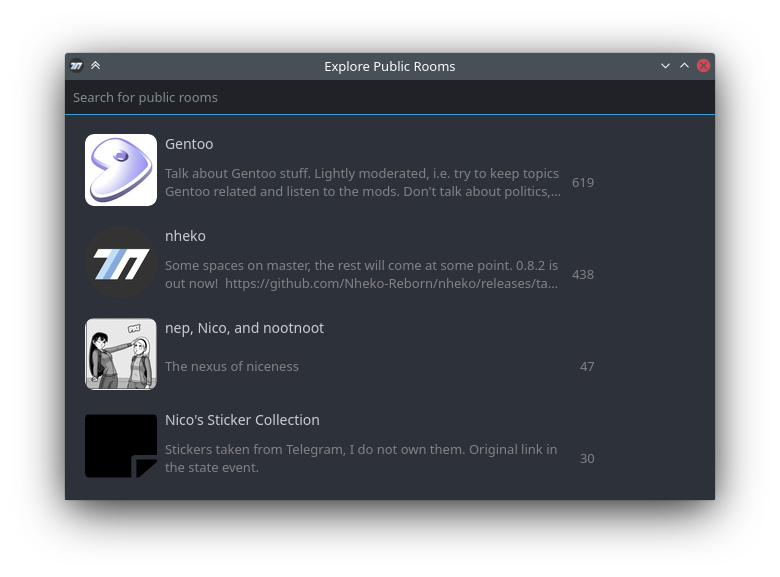 Polyjuice Client v0.4.2 has been released. This release features more functions for creating messages, including file and media messages (thanks to multi prise), replies, reactions, and edits. Polyjuice Client can also now be considered a serious Matrix library as it has a new function to generate rainbow-coloured messages! 🌈 Multi prise has also added support for registering a new user, redacting messages, and searching the user directory.

Polyjuice Util v0.2.1 (an Elixir library for Matrix features that can be used on both the client-side and server-side) was also recently released. The main feature for this release is support for handling Matrix URIs, and supports mxc:, matrix.to, and matrix:-style URIs.

Version 2 of Simple-Matrix-Bot-Lib will release very soon. It is complete in all but the documentation. If you would like to try version 2 early, you can find it on a branch of the git repository here https://github.com/KrazyKirby99999/simple-matrix-bot-lib/tree/v2.

Some of the changes are shown below:

These changes are only some of the most important changes between versions 1 and 2, and there are more changes in addition to these. I apologize for the delays in releasing version 2.

Mjolnir v0.1.19 is out now with a voice message protection built-in (ideal for public communities where voice messages can't be easily moderated) and updates to the shutdown room command to support modern Synapses. Check out !mjolnir protections after upgrading, and visit #mjolnir:matrix.org for help and support.

Since element now landed voice message support I build a small maubot plugin which prevents audio and voice messages as those cannot yet get restricted by power level.

It starts by warning you via replies, after a configured amount of warnings goes over to kicking and after a certain amount of kicks it will ban you in the room the event was sent in.

The counter is global so if a user in room A runs out of warnings and the same user sents a voice message in room B where the bot is present the bot will ban the user also in room B without further warnings.

This plugin is already running on my maubot at @mjolnir:nordgedanken.dev

New version of Middleman, the helpful relay bot in the middle. Version 0.2.0 in addition to various smaller changes and fixes, enables sending out messages from the command room to any room the bot is in, supports relaying notices (so you can command other bots using the Middleman bot 🤖) and adds support for flagging certain rooms as "mention only", in which case only mentions are relayed.

This weekend we are organising a Matrix Dev-Room at the FrOSCon with some quite interesting talks (in German 🇩🇪):

Take a look at the conference schedule and join us at #FrOSCon:fiksel.info!

FrOSCon will be a virtual event and it's free! See you tomorrow!

Howdy folks, it's been aaaaages since I've done mad little project but I had some LEGO and was bored on a Sunday. I present to you matrix-poweredup! This is a little bot that connects to any LEGO PoweredUp devices (using the node-poweredup library). You can then start controlling the motors via Matrix, and have the sensors report back into the Matrix room. It's currently limited to a RC buggy I picked up over the weekend but it's very extendible. It also includes a web application to control things via a gamepad, if that's your bag.

There will be a little demo at the end of Matrix Live, so watch this space 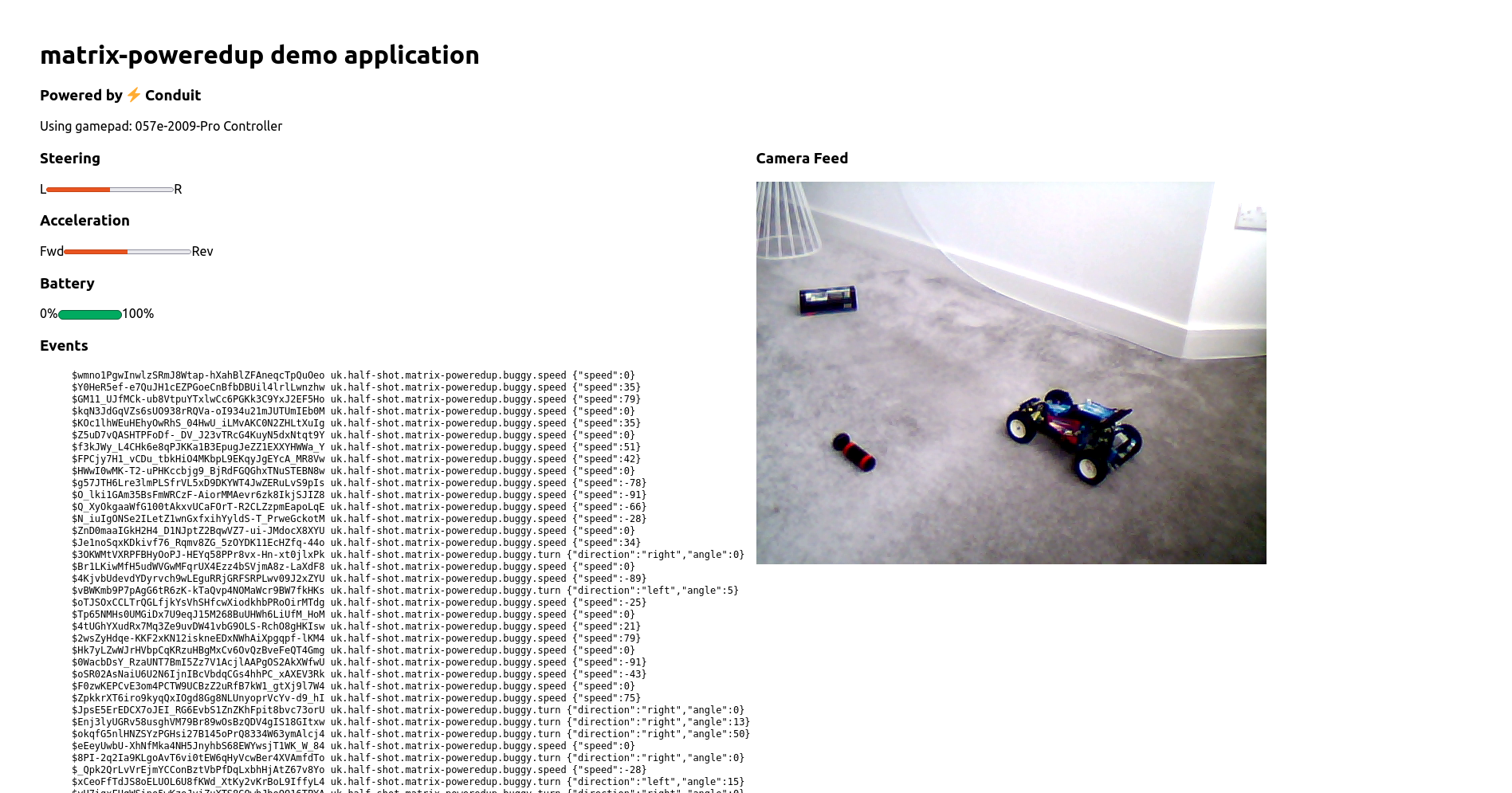 Some updates on the serverstats project:

As a few of you noticed the pages are currently down due to some mess that happened (not going into detail on purpose here).

The pages however will soon come back. I am now using the time they are down to improve the code and some pages on it. So dont be worried it is not dead but it will come back as soon as I get those changes done 🙂

Circles is an iOS app for end-to-end encrypted secure social networking and sharing, built on top of Matrix. Its goal is to provide a safe and convenient way for close friends and families to share things that they wouldn't post publicly -- e.g. for parents to safely share pictures of their kids. You can also use it to share updates with your friends, without a creepy advertising company data mining every word.

Recent updates to the Circles beta include:

The latest beta build of Circles (v0.91) is available from Apple on TestFlight

As a hobby, I built a website called Digital Justice. It's a website that explains in layman's terms what certain digital topics are (like data sovereignty, software autonomy and abandonware continuity) and why those topics matter.

The website may be a bit too simple for privacy gurus who know their stuff, but it's meant as an accessible resource to help people understand why privacy matters. Feel free to use the website as a resource, share the RSS feed or use it as a FAQ to your colleague who doesn't understand why you're so adamant on using an open communication protocol.

This week's room is: #physics:matrix.org