These Hydrogen news leave me breathless!

Bruno also shared the news about the latest release:

Hydrogen 0.2.7 with Single Sign-on and well-known lookup also got released this week

MSC2582 (Removing mimetype from EncryptedFile object) was one of those MSCs that were relatively small, but had been languishing for ages. Partly because it required client implementations to update, but also partly because one needed to go in after a while and actually confirm that all known clients had updated. @uhoreg took up the mantle on his own to do so, and as a result this MSC has hit FCP and is soon to be merged. Thank you!

The random MSC of the week is MSC3262: aPAKE authentication!

Alongside MSC2957 and MSC3265, this MSC is requesting a better way of communicating one's password to the homeserver without sending it in plaintext (over TLS, hopefully).

Remember that this is only done in exchange for an access token, which is then used for all subsequent requests. Still though, I can see the merit! 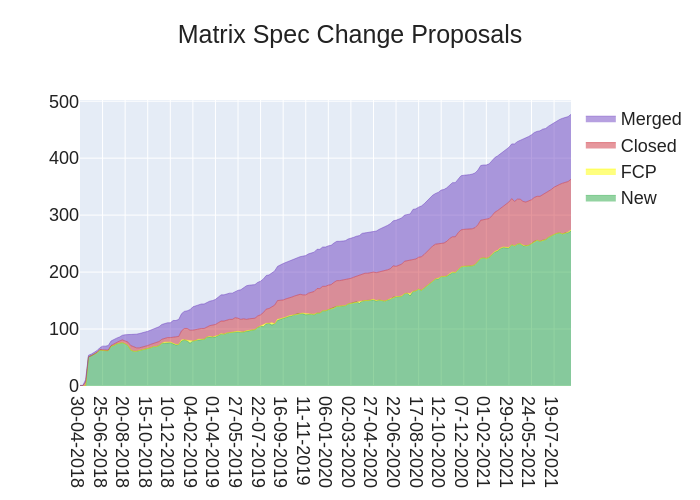 Synapse 1.41.0 is out! Check the release announcement to find out about all of the details, including progress on MSCs, great new Admin APIs, and the ability to handle the /createRoom endpoint on workers. As mentioned in last week's TWiM, Synapse 1.41 uses MSC3244: Room version capabilities to tell clients that they can and should use Room Version 8 when creating restricted rooms. The future is here!

Lastly, the Synapse team would like to extend a warm welcome to Sean Quah, who joined Element's backend team this week. Welcome, Sean!

And yet again this week sees another update to my Helm Charts, with matrix-synapse bumped to 1.41.0

Thanks to Alexandar Mechev, matrix-docker-ansible-deploy can now install the beeper-linkedin bridge for bridging to LinkedIn Messaging.

This brings up the total number of bridges supported by the Ansible playbook to 20.

FluffyChat is the cutest cross-platform matrix client. It is available for Android, iOS, Web and Desktop.

This release adds more functionality for spaces, enhances the html viewer, adds a brand new video player and brings some improvements for voice messages. Thanks to everyone involved!

Please note: It will take some days until it arrives in all appstores.

Find more about Cinny at https://cinny.in

Sailtrix is a matrix client for SailfishOS.

These changes have been released in Sailtrix 1.3.1, available on OpenRepos.

This week Tobias implemented blurhash in NeoChat for a smoother image loading experience. Tobias also continued working on E2EE and this past week his focus was on decrypting encrypted files.

Ement.el, a Matrix client for Emacs, gained some more improvements this week:

Feel free to join us in #ement.el:matrix.org!

Nheko now supports uploading to online key backup and warns you before enabling it, that we don't recommend using the asymmetric version. If you update to one of the current builds (and or the next version), you will also experience a bit longer load times on first startup. That is because we force-cleared the cache to be able to handle the new goodies like spaces and sticker/emote-packs. In the best case, everything is seamless.

We also had contributions by various people:

I'm not sure we have ever seen that many new faces contributing to Nheko in a week, I'm pretty happy to see that!

Busy week in Fractal land! It is the end for GSoC, but it’s not really over. While some merge requests from our interns are still ongoing, Julian merged a bunch of them. On Kai’s side, the long awaited Room details are finally here. Alejandro, on the other hand, landed code to get display name and avatar of accounts at startup.

Circles is a project to build a secure, end-to-end encrypted social network on top of Matrix. The iOS app is currently in the final stages of beta testing in preparation for a 1.0 release.

Updates this week include:

If you would like to try the latest Circles beta (v0.93), you can get it from Apple here

Ruma is a set of Rust library crates around Matrix

It's been so long since our last update that I couldn't possibly list all of the individual changes, but here's a rough overview of the work since then (three months ago):

There's been loads of bug fixes, many compatibility improvements and at least one large refactoring. We've been much faster about releasing changes to crates.io after ruma 0.1.0, now we're already at ruma 0.4.0 (!); the changes needed to upgrade are really not that significant though. Notable areas of improvement are

Additionally, the GSoC coding period is over and our students have both written a blog post summarizing their work: API Coverage project (Adam Blanchet), Tooling project (Devin Ragotzy)

If you want more detailed updates about Ruma, please watch our repository's GitHub releases, since nobody in the project currently wants to write regular blog posts or TWIM updates (if you are interested in changing that, get in touch over at #ruma:matrix.org).

This week a new stable version of libQuotient, 0.6.8, has been released. While the main focus has been fixing bugs and sustaining the codebase, one significant highlight is that read receipts and fully read markers are distinguished now, which should improve interaction with other clients that has been treating them differently for quite some time now. This version is anticipated to become the base of the upcoming Quaternion 0.0.95.

The second major version of the simplematrixbotlib package has been released. It is available from Github and PyPi.

Example usage is shown below:

You can find the quickstart here.

I made an experimental Matrix-based persistent storage CRUD repository: https://github.com/sendanor/matrix/blob/main/MatrixCrudRepository.ts

This week's room is: #terminal-gaming:matrix.org

"Channel dedicated to games running in terminal enviroment (or one that looks like terminal) As long as the game could be easily ported to terminal, it belongs here :) Telegram: t.me/cligaming"

If you want to suggest a room for this section, tell me in #roomoftheweek