This week saw the merge of three MSCs from first-time MSC authors! MSC3818 (Copy room type on upgrade) from @Mikaela and both MSC3786 (Add a default push rule to ignore m.room.server_acl events) and MSC3827 (Filtering of /publicRooms by room type) from @SimonBrandner. Nice work to both of them!

A bundle of small quality-of-life changes to the .well-known server and client endpoints. Removing some ambiguities, replacing old and deprecated endpoints as well as a potential size cap suggestion.

Looks like a good contender for one to push over the line given a bit of review and response!

TWIM: someone in #matrix:matrix.org complained that the image in the spec section is always the same, so I made this gif (actually webp) out of all those images:

We've started work on our HG HomeServer written in pure TypeScript, compilable as a single JS file, with no dependencies except NodeJS. It's intended for a special use cases when Matrix is used as a backbone for custom apps. It's lightweight, minimal and for the moment isn't even planned to support full Matrix spec. We might make it possible to run it on browser later. https://github.com/heusalagroup/hghs

Another week, another release! Synapse 1.64.0 was released this week, featuring a host of new features, bugfixes, and internal changes aimed at reducing memory usage, increasing performance, and improving the developer experience. Check out the full list of changes here. In addition, work continues on faster room joins. The goal gets closer every day!

This week we released Dendrite 0.9.0 and Dendrite 0.9.1. There are quite a few big changes, including an all-new caching model and several optimisations. This release also moves our baseline supported Go version up to Go 1.18.

The following changes are included across both releases:

As always, please feel free to join us in #dendrite:matrix.org for more Dendrite-related discussion.

This week has seen the usual updates to my Helm Charts - with element-web being updated to 1.11.2 and matrix-synapse to 1.64.0. Additionally, the matrix-synapse chart now also allows for adding entirely custom .well-known data - along with an example on how to use that for MSC1929.

This bridge connects users on Matrix and Discord – or other platforms, if combined with other bridges. Earlier this year the community bridge has been adopted by the Matrix.org bridge team to give it some attention. Its most recent update dated back to December 2020 and some fixes waited for a new release.

Well, here it is! v2.0.0 Its breaking changes are the requirement of NodeJS 14 or newer and the usage of yarn instead of npm install. Furthermore, the update introduces a changelog and rolls out the guidelines we use for developing other matrix.org bridges.

Development marches forward, with the focus on getting chat into a usable state and task's up as the first MVP app on top: Effektio now support sending multiple images at once in chat, has seen fixes to the chat in widescreen mode, and now support markdown for chat messages. Meanwhile device verification is drawing to a close with a few remaining UI fixes being implement and the state machine for tasks being fleshed out slowly but steadily.

📰 You want updates more frequently and close to when they actually happen? Join our Effektio Matrix News room, discuss general aspect in our foyer or hang out with the devs in our tech channel.

After a short vacation, I've done some new work on populus-viewer. Most of this has been UX and bugfixes, but I've added one new feature that I wanted to share. MSC3775: Markup Locations for Audiovisual Media gives a spec for annotating audio and video on matrix, but it also allows you to annotate images. So, for completeness sake, I've added support for annotating image files in Populus! This might be useful for discussing publication layouts, product designs, or for teaching art history. So populus can now annotate: video, audio, images and pdfs.

As always, if you want to learn more, follow populus development, or discuss the future of decentralized social annotation on Matrix, come join us at #opentower:matrix.org.

matrix-widget-api v1.0.0 was released yesterday, reflecting the fact that we're not expecting any big changes to the library's architecture for the foreseeable future, and that it's more or less ready for wider use.

It also comes with a couple of new features ✨ for widget authors: Sending and receiving to-device messages with MSC3819, and getting TURN servers from the client with MSC3846. Together, these features enable some new complex use-cases, such as doing VoIP from inside a widget. See Matrix Live for a preview of what that looks like with Element Call! 📹️

This is as good a time as any to mention that matrix-widget-api doesn't have to just be for web-based apps. If you're building mobile apps with Matrix and want to make use of widgets, running matrix-widget-api inside a web view to liaison with the actual widget can make it a lot simpler to start supporting widget API features. If you're curious, watch Element iOS+Android for upcoming examples of this.

This week saw a few major improvements on the dev-ex of the Rust SDK (among others): support for refresh tokens landed; we have a setup for integration tests against an actual synapse instance now (and started writing tests); our docs for main now contain the js bindings, too; event handlers can now be unregistered and we've added an API for room specific event handlers. Further more, we've refactored the examples (now to be found in /examples rather than some sub-sub-directory no one finds) and created two more: getting-started combines the autojoin and command-example with a lot more additional inline comment to explain what is going on and custom-events showcases how to use the sdk and ruma types to send any custom events (in that case a ping-ack example) over matrix!

This was also a week of fighting the ci. After the integration tests landed, coverage reporting broke and an investigation was kicked off to check whether llvm-cov is in a usable state for us by now (it is not), but a fix was found. We've also started regretting adding npm-based workflows in our repo, as we've found ourselves at the end of an upgrade bug and the saw CI failing without us changing anything :shakes_fist_at_sky: . A fix was found quickly by pinning a sub-dependency. On a similar note, we've postponed merging the kotlin bindings until the android team is back on it and available to answer some questions we have, and the wasm-js bindings showed build failures on CI, which the original author will have to take a look at after coming back from vacation - thus delaying crypto-js a bit further.

It's been a while since I've made an update on Polyjuice Client Test. Since the last update:

I'm also happy to say that Polyjuice Client Test has helped find bugs in some clients, which have since been fixed.

This week I'm showing off an early look at the Matrix public archive. As the name suggests, it acts as an archive of history for your world-readable Matrix rooms. This allows you to view historical content day-by-day and jump back years ago to see what your Matrix room was up to.

More importantly, it also allows Google to do the same thing so you’ll probably start finding Matrix content from your favorite search engine and be able to harness the massive knowledge base stored in Matrix. Imagine seeing Matrix logs instead of Stack Overflow answers when googling questions! The new portal into the Matrix ecosystem 🌌

You can also see this demoed in this week's Matrix Live video (at the top of the page).

Under the hood, we use the MSC3030 /timestamp_to_event endpoint to fetch the messages for a given day and then we sever-side render the events with the Hydrogen SDK. Re-using Hydrogen gets us pretty and native(to Element) looking UI and keeps the maintenance burden of supporting new event types in Hydrogen.

If you want to follow what’s going on and see how it's coming along, you can checkout the project on GitHub, https://github.com/matrix-org/matrix-public-archive

Thanks to @lifeofbrian:justprojects.de and @ben:rs485.network the Docker image of the bot was shrunk from 406.28 MB to 69 MB (nice)! You can get the new image from Dockerhub or install it via the matrix-docker-ansible-deploy.

I was able to to host a matrix-synapse server on termux app on an android device. I documented the process on termux-synapse github repo And started working on a script that automates the process (final commit is being currently tested before pushing). It was a "for fun" type of thing. But I can see it being useful for people who do not have access to a raspberry pi (such as myself at the moment) to use as a small homeserver. It can hold up in 1 to 1 Direct Messages and in small rooms. 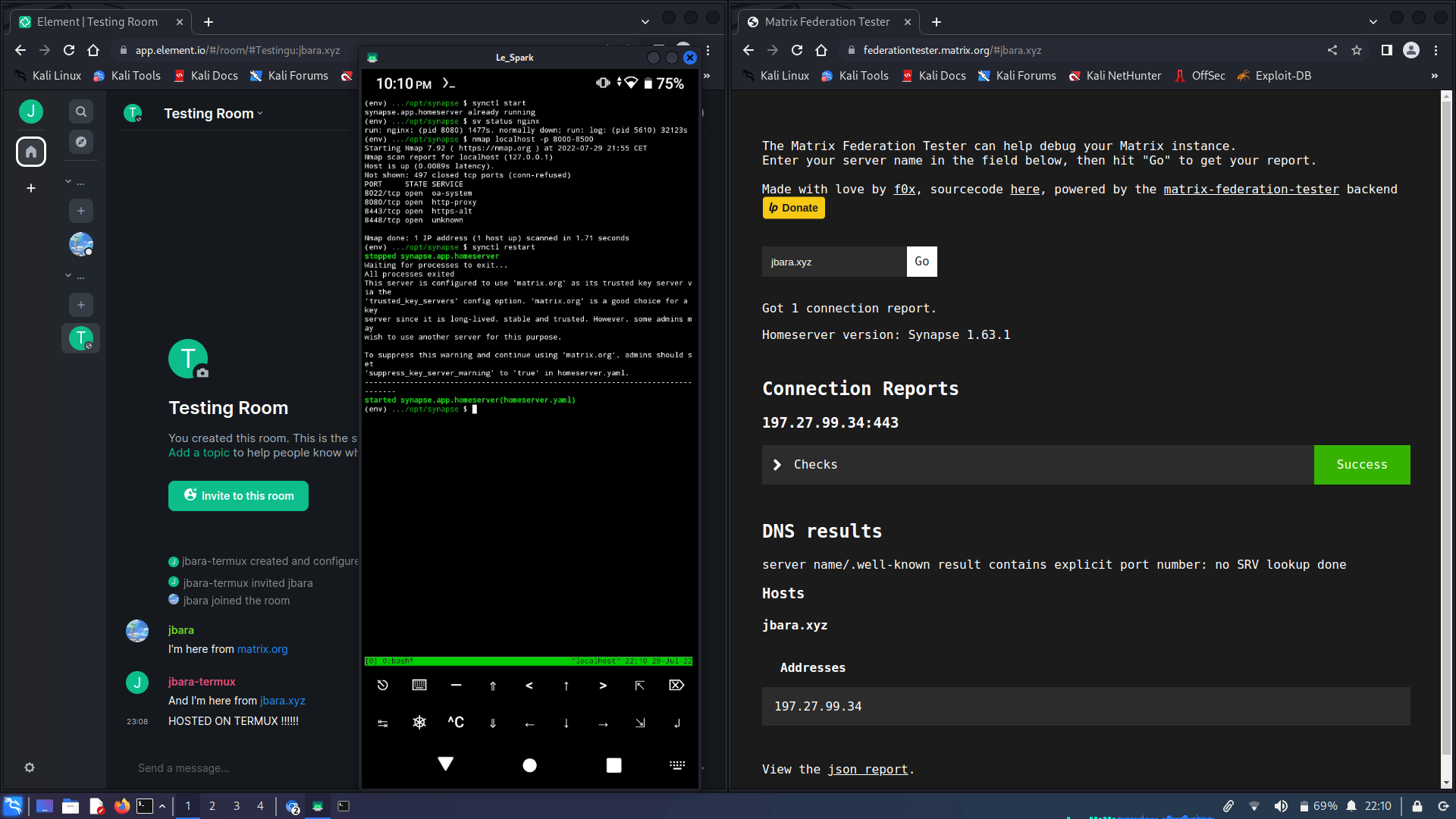 Room of the Week 📆

Have you ever felt lost in the Matrix world? Too many rooms and spaces to manage? Well, back by popular demand (with Timo's blessing), I present, The Room of the Week! Every week we strive to highlight a room or a space that we believe deserves attention for discussing interesting goings on across the Matrix Network.

This week, we are highlighting: #libregaming-games:tchncs.de

A matrix space dedicated to finding all of the free open source games, engines, and assets in the Matrix world so that you don't have to. Helpfully organized, and well maintained, it is the Premier stop for open source gaming on The Matrix Network!