A short Matrix Live where we can see the goodness coming to Element very shortly!

I hope you like new MSCs, because this week has had a lot of them!

Spec Core Team review this week has focused on getting the remaining bits of threads over the line, mainly MSC3773, MSC3771, MSC3874 and MSC3856.

The random MSC of the week is... MSC2730: Verifiable forwarded events!

Ever noticed how when you forward an event in Matrix today, it simply looks like you've just copy/pasted the message and sent it yourself? Other messengers will often include some metadata with the forwarded message to inform the room that it's a message originally from another room and/or user, rather than being originally authored by yourself.

This MSC attempts to optionally add that metadata to messages, with the crucial goal of preventing that metadata from being faked (which could be dangerous). Check if out if that's something that interests you! 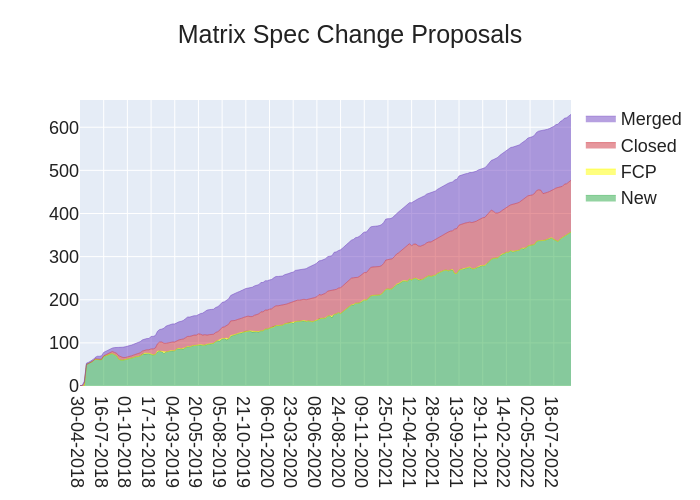 This week the team released Synapse 1.67.0rc1! This first release candidate includes a few features, a bunch of notable performance improvements and bugfixes, and also removes the long-deprecated TCP replication. We thank everyone who help us test this RC by running it ahead of the release next week, and reporting any bug or feedback on the Synapse repo or in #synapse:matrix.org, respectively.

Another very exciting thing that happened this week is the merge of the base code infrastructure to support running Rust code in Synapse! You can find more about this in the pull request, but what this means is we can now replace some bits of Synapse written in Python with code written in Rust to make it more efficient. This is not a rewrite of Synapse in Rust, but rather a way for us to optimise some specific hot paths. Currently there's some more work going on with implementing push rules support in Rust, as well as converting some caching code. Watch this space for more info!

This week we released Dendrite 0.9.7 with quite a few bug fixes and performance improvements. It's a recommended upgrade, so if you have a Dendrite installation, please upgrade! Changes include:

As always, please feel free to join us in #dendrite:matrix.org for more Dendrite-related discussion.

"Are we bridge yet?" - Yes. The most notable changes in that release - you can send emails from matrix!

Source code with updated Roadmap and feature list, say hi in the #postmoogle:etke.cc

New release out now, it includes improvements to stability and performance.

Okay, Nheko might start with N, but you can get a proper changelog too:

Requires mtxclient 0.8.1 and fixes a few crashes that can be abused by remote users.

THANK YOU EVERYONE WHO CONTRIBUTED TO THIS!

FluffyChat 1.6.4 has been released. 🥳 This time it is only a minor bugfix release which also updates translations and some dependencies. The app now tries to automatically request keys for undecryptable messages and displays a detailed explanation why a message is unable to decrypt, when clicking on it.

Hello from the VoIP team 👋

We've just released element call v0.2.11 which we hope should fix any remaining problems with multiple calls (aka split-brain) in a room: please rageshake if you see further problems 🙂

Additionally, we are really excited about embedding Element Call into Element Web and we need your help: It's time for Community testing.

❓ Please help us test our new integration of Element Call into Element Web.

I externalized the building of libolm binaries into a separate git repository. As a result, opening the Trixnity project does not need any C-Library-Building-Tools, because the binaries are just downloaded. On the one hand this speeds up building Trixnity significantly and on the other hand contributing to Trixnity is much easier (especially on Windows machines). Just do ./gradlew build.

This week saw the merge of PR/Issue #1000, a milestone, that, though random, marks the continuous progress and pace this project has taken up. 🥂 to the next 1000!

Further more we saw the merge of make create_dm_room public, allowing any developer using the SDK to use it as well saw the first review of the sliding sync PR, which now also has a tracking issue explaining what remains to be done (and when) once the PR has landed. Other than that we had several refactorings, clean ups and minor fixes merged, in anticipation of the upcoming release of 0.6, which we expect to land before the end of the month. If all goes will that release will contain both sliding sync and the new timeline API behind feature flags to use and play with. 🫰 Fingers crossed.

Use Matrix as a backend for local-first applications with the Matrix-CRDT Yjs provider.

Matrix CRDT enables you to build collaborative applications (like Google Docs) by using Matrix as backend for sharing application updates.

In this release we've updated matrix-js-sdk to the latest version 19.4.0, which was a big jump. This opens up the path to adding support for End-to-end Encryption and Sliding Sync - and are looking for people excited to work on this.

I've also rolled it out to the preview version of TypeCell; which is a multiplayer document / programming environment that runs on top of Matrix (more soon!)

Come chat in our Matrix space or in Beyond Chat!

Thanks to Julian-Samuel Gebühr (@moan0s), matrix-docker-ansible-deploy/ can now set up Cactus Comments - federated comment system for the web based on Matrix.

See our Setting up a Cactus Comments server documentation to get started.

Create config.toml to configure the bridge.