matrix.to links can now be opened with Thunderbird and Syphon!

This week has seen more review on threads from the Spec Core Team, as well as some further aggregations work. See the FCP list above! MSC3771 (Read Receipts for Threads) and MSC3856 (Threads List API) are also looking quite close to starting FCP.

In other news, yours truly has written up some words (adapted from some internal docs written by @erikjohnston) amounting to a simplified guide to writing MSCs. The hope is that it'll help spell out the process in a more succinct manner, as well as provide answers to common questions/edge cases.

The document's words are still in flux, and still only exist as a PR; so do feel free to leave some suggestions or feedback if you have some!

The random MSC of the week is... MSC3775: Markup Locations for Audiovisual Media!

I recommend looking at MSC3574 (marking up resources) first as MSC3775 builds upon it. But as for MSC3775 itself, the MSC adds support for annotating media - storing those annotations as events in a Matrix room!

This could be useful for building a decentralised app for marking up audio files. Collaborative audio editing anyone?

As far as I can tell, this MSC is currently waiting for MSC3574 to progress before it itself moves much further. But feel free to check out both in the meantime if you're interested. 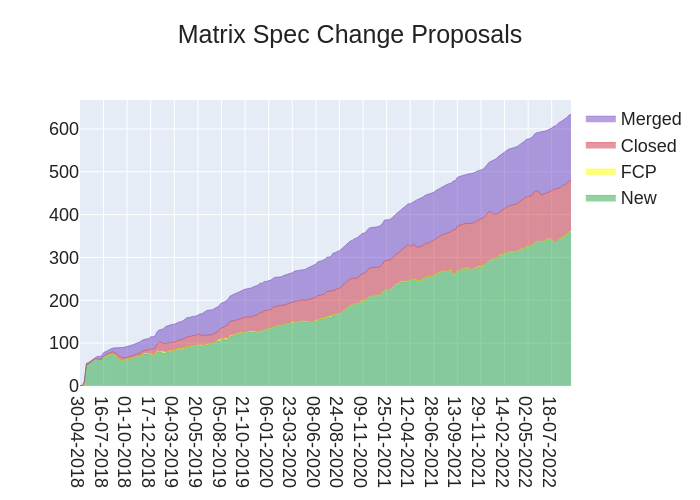 This week we've released Synapse 1.67! This Synapse release is the first one to use Poetry 1.2, and also removes the long-deprecated TCP-based replication protocol. Synapse workers are now required to use the Redis-based protocol which we introduced back in 2020. If this isn't already the case for your deployment of Synapse, see the documentation for workers as well as the upgrade notes, to update your configuration.

In other news, Synapse 1.68 (which is due to release on the 27th of September) will introduce a couple of changes in dependencies. The minimum supported SQLite version will be raised to 3.26, meaning that Synapse 1.67 is the last version of Synapse supporting SQLite versions 3.22 to 3.26. In addition to this, a Rust compiler will be required for source checkouts, as we are starting to introduce Rust code in Synapse (as I mentioned last week). This latter change should not impact installations that use pip install matrix-synapse, Debian packages from packages.matrix.org or the matrixdotorg/synapse Docker image to manage and run Synapse. See the upgrade notes for more information about these two changes.

This week sees some of the usual updates to my Helm Charts, with element-web being updated to 1.11.5 and matrix-synapse to 1.67.0.

Hello gang. This week, another hookshot release. They do come fast!

We've fixed a bug which had the potential to cause crashes when JSON logging is enabled, and written a whole torture test for the logger to ensure it won't do that again. We've also made some quality of life improvements to the GitLab connection type :)

You can get the latest release here

But I have a bit more for you this week, we're working on a few new features to hopefully improve the lives of developers out there building webhook integrations.

First, we are adding the ability to view requests and logging from within the widget UI. This means you can now debug why your webhooks might not be working without having to leave your client. This includes the ability to log debug messages and read them back later!

Secondly, we're adding some new sci-fi functions to the scripting environment. The first of which will allow you to embed images / videos into the message output, with a function to to create matrix content URLs from a regular URL.

Finally, and this is probably the most sci-fi. We're working on a feature for you to load scripts from other rooms for use in your webhook. This means developers will be able to build whole webhook handling libraries within rooms, and then share those libraries across the federation. At the moment, this looks a bit like:

We're still thinking about how to ensure it's both performant, and safe but the initial results are looking quite good.

That's all we have for you in bridging corner today, have a good weekend 👋

It has been brought to my attention that the KakaoTalk service has been updated to block older clients, and unfortunately this bridge is affected. As of this writing, using the bridge may get your KakaoTalk account banned! It has happened to both me and at least one other person, so this isn't just a hypothetical risk.

To be clear about this, I've updated the master branch to throw an error on startup, which must be manually removed from source code if you wish to continue using the bridge at your own risk.

It's currently unknown what it takes to log in safely, but discussion about it is ongoing (albeit intermittently) in the discussion channel (linked below).

Once the bridge is safe to use again, I'll post a TWIM update about it 🙂

A Minimal, simple, multi-platform chat client for the Matrix protocol.

Quadrix v1.3.3 has been released! It's available for mobiles and desktops in the respective app stores. This release introduces:

1) a new menu structure making it easier to add new functions without affecting the main UI,

2) new page animations in the "wide" app layout (on desktops and tablets) when switching between rooms or going back to the home screen, and

3) for PinePhone enthusiasts, Wayland display on KDE and SXMO UI's (it was already available on Phosh).

Please leave feedback/comments at #quadrix:matrix.org or in the issues at https://github.com/alariej/quadrix (stars welcome :-) 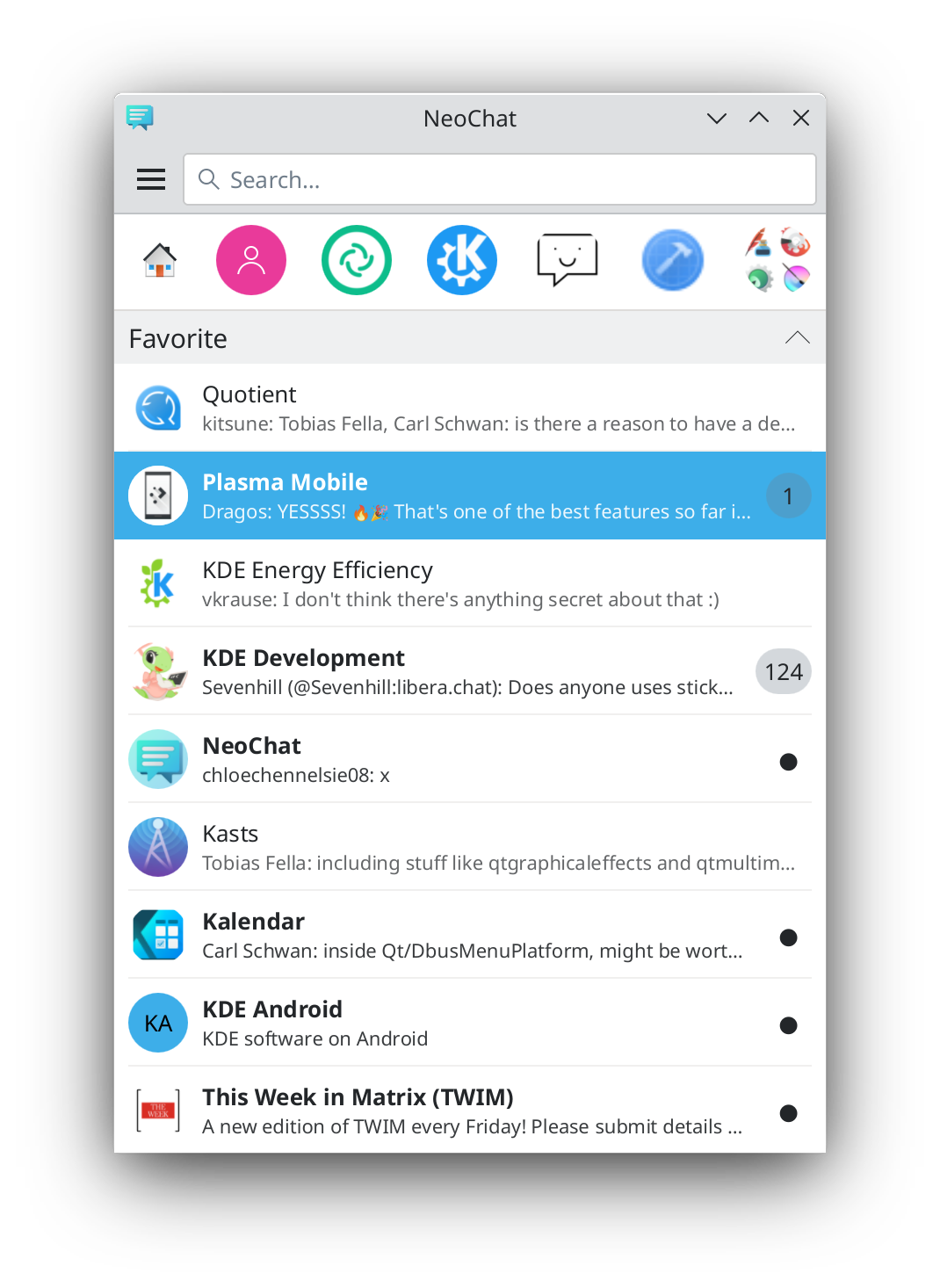 Ement.el, a Matrix client for GNU Emacs, has finally been published on the official GNU ELPA package repository. Now the current stable release can be installed by any Emacs user by simply using the command M-x package-install RET ement RET. More improvements to come. Feel free to join us in #ement.el:matrix.org.

Major Milestone: yesterday Sliding Sync was merged into main, now available behind the sliding-sync-feature flag and enabled by default for matrix-sdk-ffi for your convenience. This, too, means the jack-in sliding sync-test client is merged and part of our labs section - go out and have a try! Furthermore the key verification for crypto-js has been merged, as well as support for logging out, including tracking the soft-logout state in FFI, and support for sending markdown from FFI,

Similarly the new Timeline API, is making big leaps forward, we expecting it to land, too. It will also be available behind a feature-flag replacing the previous experimental-timeline-feature. If you were using that, please pay close attention to what is going on, as it will replace most of if not all of the previous API and data store.

Both will be available, also together, in the upcoming release 0.6 of matrix-sdk, which we expect to land before the end of the month. It was slightly pushed back as the sync event changes turned out to be more of a rabbit hole than anticipated.

Some backward incompatible changes were made, which could affect some people.

People who are using some reocmmendation configuration like matrix_synapse_workers_preset: one-of-each will now get 9 additional worker processes by default.

Your matrix server on your conditions

If you're in Germany and would like to get a managed self-hosted Matrix server, neither self-hosting difficulties nor the language barrier is getting in the way anymore.

Anybody can try bot by invite @react-sig-bot:sibnsk.net to his room.

Source code for the bot: https://github.com/progserega/matrix-reaction-signature-bot