Our guest for Matrix Live is Rich, to talk about how the Synapse team is hard at work to hunt those pesky spinners. Faster room joins now? Yes! But only for the brave!

Discourse is looking into possibly integration of their chat with Matrix. No promises yet, but it sounds crazy and cool! https://meta.discourse.org/t/matrix-protocol-for-chat/210780/13

We're all excited to see what Discourse is going to come up with, but it's early day and they don't necessarily want to have all eyes on some experimental work!

Hot off the heels of last week's Matrix v1.4 release, the Spec Core Team are now focusing on the upcoming Matrix v1.5 release, due approximately November 2022. v1.5 is expected to be mainly a maintenance release, and to that end the SCT is spending part of their time fixing up ambiguities and errors in the spec.

These are marked by the "clarification" label on the matrix-spec issue tracker. If you'd like to get involved and help out, please do!

The random MSC of the week is... MSC2659: Application service ping endpoint!

Knowing that the homeserver is disconnected would allow, for instance, the application service to inform users on bridged networks that their messages are not reaching Matrix. 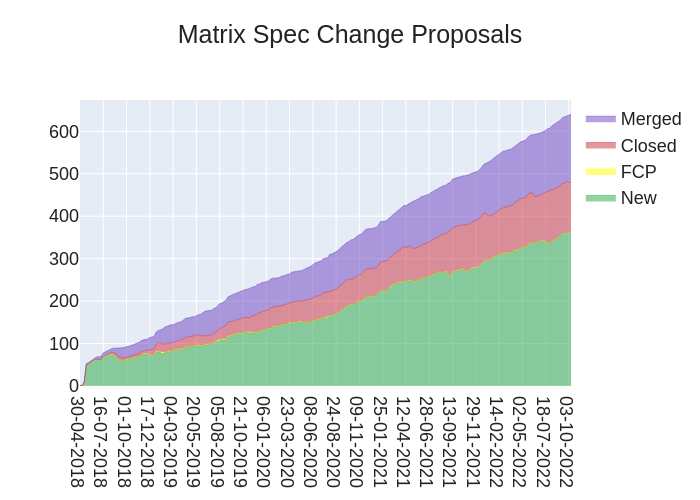 Another week, another RC! This week we released 1.69.0rc2, with a host of features and bugfixes. Some notable features are:

In addition to support for faster room joins, both federated and local, bugfixes, and internal changes to make Synapse faster and more stable. Speaking of faster, keep your eyes peeled for an announcement soon on faster federated room joins-it's coming 🚀! You can check out 1.69.0rc2 here.

At etke.cc we want to consolidate all communication into Matrix, thus our email bot-o-bridge got new release, the biggest changes are:

So, it's time to start your own email provider on top of Postmoogle!

And while you're preparing your business plan, check the source code and say hi in the #postmoogle:etke.cc

Hello all. This next release brings plenty of new features & cleanups, particularly related to configuration widgets:

Nheko is participating in the yearly hacktoberfest once more and as a result we got quite a few fixes ranging from makig colors easier to configure over crash fixes to grammar and code quality fixes. If you always had something you wanted to contribute to Nheko, now is a good time if you want someone to plant a tree for you (or if you want a T-Shirt and don't care about the environment...).

As part of the threading work if you click a thread indicator now, it will show you only that thread of conversation. And because we were already touching the timeline, you can now also search a room for messages containing your search query. Both of those things are not very fast right now and don't paginate backwards at the moment (if there are significant gaps), so take that feature with a grain of salt, but it at least exists now. 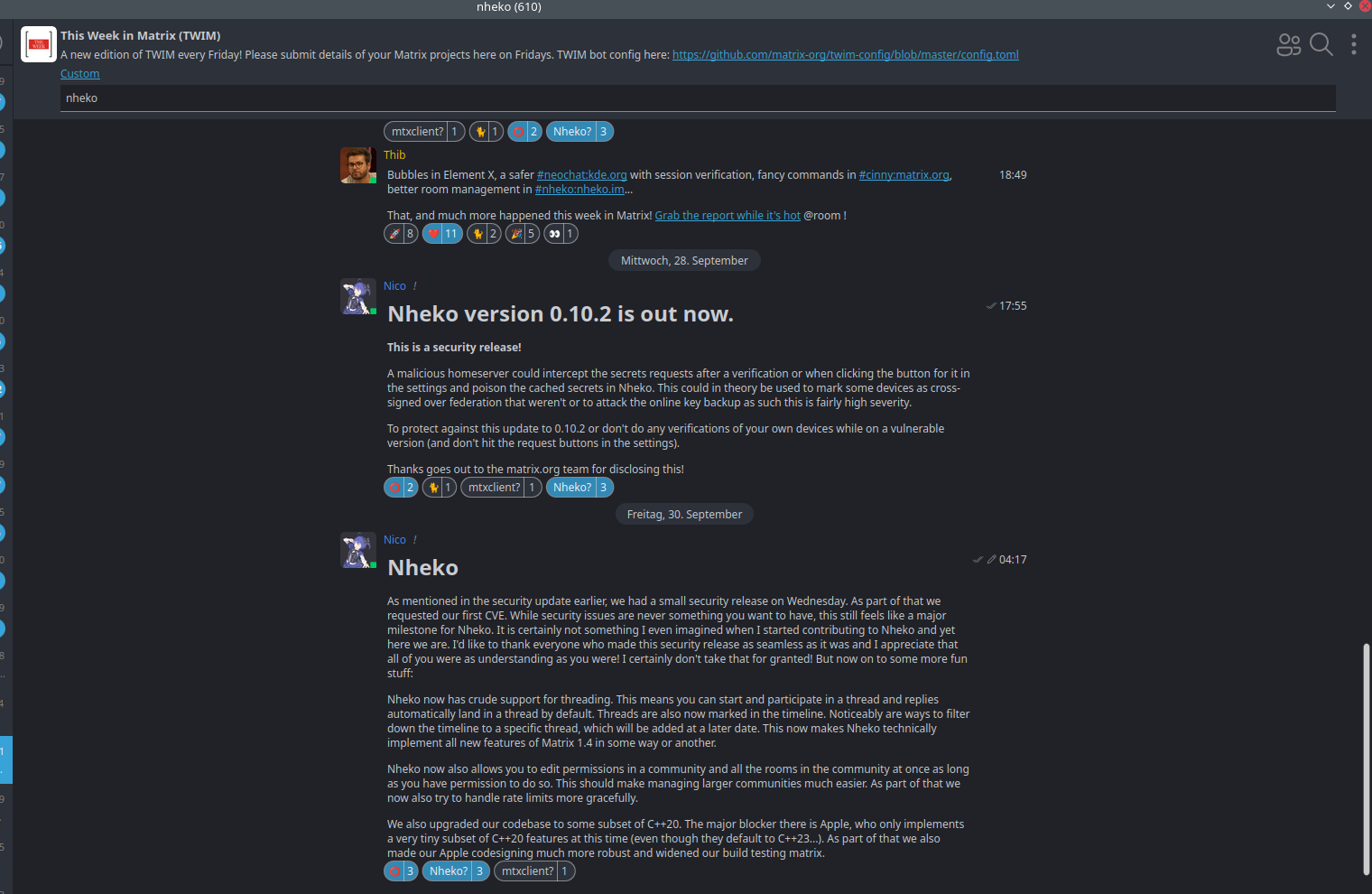 Last week, we released version 22.09 of NeoChat. You can read more about it here. While heading to Akademy, we've had the fastest ever NeoChat sprint at roughly 320km/h in a train through france and we will have a similar one tomorrow 🙂. During Akademy, we discussed several plans for NeoChat that we will hopefully implement soon. In terms of development work, noteworthy things that happened include: 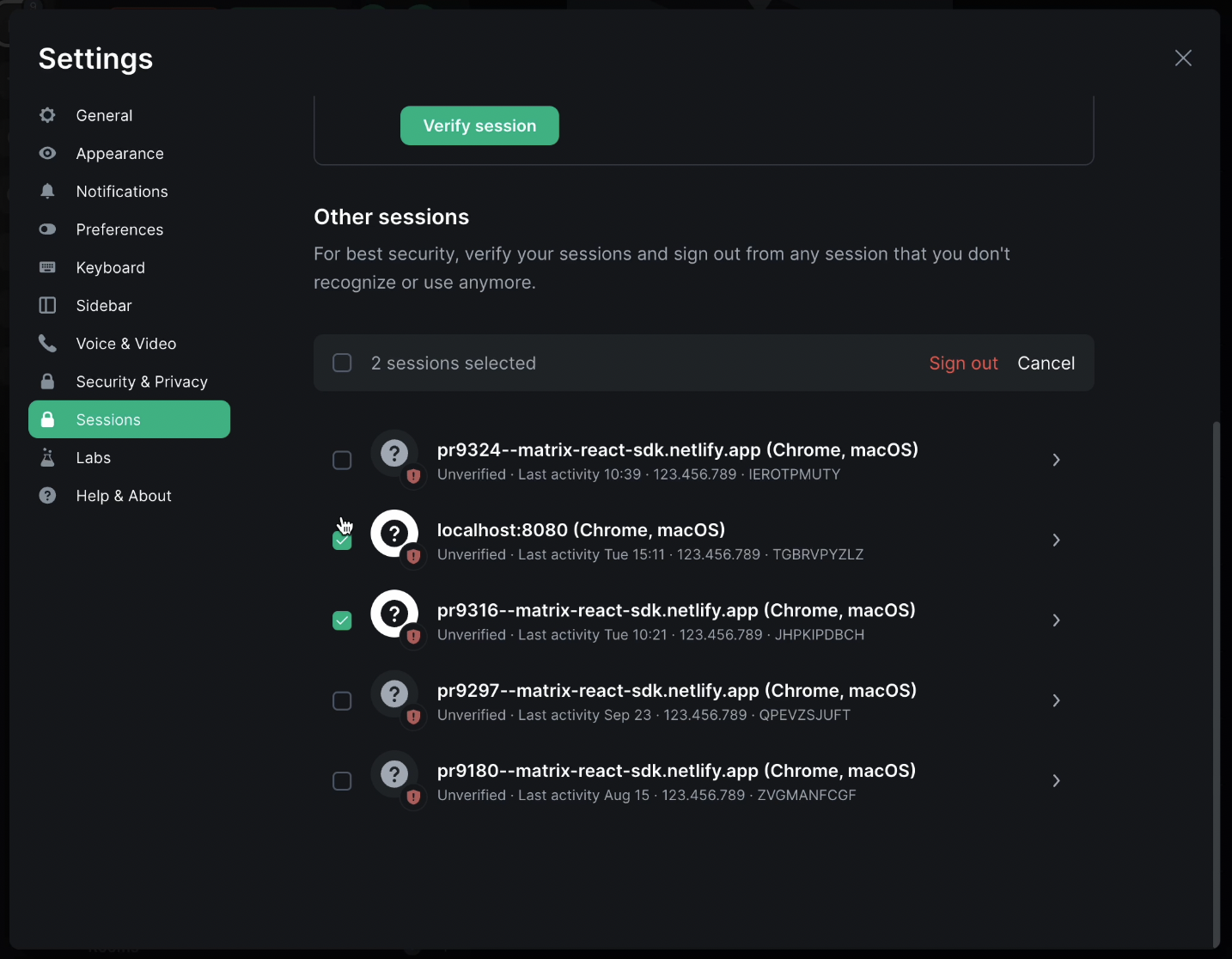 Third Room documented and released its unity -> glTF export pipeline to make it easier for asset/scene creators to build worlds. The native in-world Third Room editor will come soon, but this is a great stopgap (and is how we built the worlds for Tech Preview 1). https://github.com/matrix-org/thirdroom-unity-exporter

I merged a really exciting change into Trixnity this week: The StateFlowCache, which basically is a reactive cache on top of an arbitrary database does not need a CoroutineScope parameter for any read or write operation anymore. It was needed to react to the lifecycle of the consumer, so that not used data could be removed from the cache. This was really error prone, because if the consumer passed a wrong CoroutineScope with a too long lifecycle, the cache could grow unlimited. I figured out to solve this with Kotlin Flows, so everything is lazy and the lifecycle can be determined from the Flow consumer! Because this is a breaking change, the next released version will be 3.0.0. If you want to test this major change, you can try 3.0.0-SNAPSHOT.

simplematrixbotlib will soon be releasing its third major version. This version will include breaking changes to syntax. The changes should provide greater modularity and a more intuitive api for config, matching , and other areas. To check the progress, please visit https://codeberg.org/imbev/simplematrixbotlib/projects/1779 or visit the matrix room at https://matrix.to/#/%23simplematrixbotlib:matrix.org

A Qt5 library to write cross-platform clients for Matrix

In a complete coincidence with Akademy, libQuotient 0.7 reached its beta status. It's been a very long wait since 0.6 but there's a significant reason: thanks to Tobias Fella and Carl Schwan, the library gained E2EE support! Now, calm down - this is still in beta, so things can fall apart even on their own, before any malicious actors come. It's already good enough for testing though. There's a long list of other things that happened in the library over this 1+ year but the longer read is saved for the release. Meanwhile, the brief pre-release notes gloss over most interesting things. There's no accompanying beta of Quaternion (yet) - this will take some more time to pack together. In the meantime, you can build NeoChat that already supports the newest library code (kudos, guys!) to experience the latest and greatest that the Quotient project has to offer (who said "device verification"?).

Thanks to @TheOneWithTheBraid, matrix-docker-ansible-deploy now supports installing matrix-ldap-registration-proxy - a proxy which handles Matrix registration requests and forwards them to LDAP.

See our Setting up the ldap-registration-proxy documentation to get started.

envs.net is known to be a friend of decentralization and provides now an matrix-federation-tester.

This can be reached via the URL: https://fed.envs.net/

A bot using the matrix-rust-sdk.

So my geek's Proust madeleine has always been writing chat bots, and oops, I did it again!

Introducing Trinity, a bot written in Rust using the fancy matrix-rust-sdk. Its peculiarity is that it uses WebAssembly modules to implement commands. For instance there's an uuid command that will react to !uuid messages and respond with an auto-generated uuid, and that is implemented as a Rust module compiled to WebAssembly.

The bot can hot-reload the WebAssembly modules, which makes for a quite pleasant experience when developing modules, and also allows deploying via pushing modules to a remote server.

Using WebAssembly for the commands has a lot of (future) potential: giving developers the ability to write modules in any language they want (in theory, at least), being able to try the modules in a Web page hosted on a static web server (since WebAssembly can run on the Web, duh), and if in the future Matrix messages could carry a WebAssembly payload, also running the bots directly on the clients 🤯🤯

It's mostly a tiny personal project that I've used to learn more about WebAssembly Interface Types (and in particular, wit-bindgen), with a personal want to replace my previous Botzilla Matrix bot that was written in JavaScript. If you want to mess around with Rust and/or WebAssembly, feel free to come over and contribute! I've opened a few issues for interesting feature requests.

And if you want to chat about it, there's, of course, a Matrix room for that: #trinity:delire.party!

I built a Matrix-RSS Room Bot. Most RSS bots serve any feed in any channel; this bot serves every feed in a separate channel. This means it's most useful for:

This is my first real contribution to the Matrix community so it's quite an MVP, but I have options for improvement if the project is appreciated:

You can test the bot ( @rss:noordstar.me ) by inviting it in a (non-E2EE) room, or by joining #rss:noordstar.me where there's also room for discussion about the bot. ☺️ It is running on a relatively small computer, so please be nice to it.

What would be possible if automation services, like IFTTT, were open-source? No need to wonder anymore. Windmill is open-source and you can self-host it to run your flows and scripts. You can write you own scripts using TypeScript, Go or Python.

In the past months I wrote scripts to integrate with Matrix and other protocols like Mastodon, Funkwhale and Nextcloud.

Check out some of the projects I've built. Most fetch data from other services and send them to Matrix rooms for me. It allows me to monitor OpenWiFi routers and archive my music listening history. https://github.com/windmill-labs/windmill/discussions/categories/show-and-tell

They spoke to Matthew Hodgson about what Matrix is, about what it should be and how Element and Matrix compare to other chat apps. They discussed the decentralized open source idea behind it, as well as the revenue model and the costumers who use it. Also the things in development got mentioned, like the metaverse and p2p.

Got interested? If you speak Dutch (or want to learn it), you can sign up to Tweakers.net and read it for free: https://tweakers.net/reviews/10530/matrix-decentraal-chatprotocol-onverwacht-populair-bij-bedrijven.html

SeaGL (Seattle GNU/Linux Conference) will be held online November 4–5, powered by Matrix! Our keynotes, presentations, and social activities about free / libre / open source software, hardware, and culture will be announced soon. We've been refining the virtual conference experience for three years and would gladly welcome new wings and beaks to our all-volunteer staff!

And come November, join our free—as in freedom and tea—grassroots technical summit, no registration required. This year's theme is "hang ten", in recognition of our tenth year!