This week we've been continuing our mission to define Matrix as the interoperable standard for instant messaging! With many of our discussions expected to happen next week in this area, we've prepared some drafts for the wider community to review (with even more on the way!). With MSC3923, we're asking for feedback on whether people think the approach is something that could work for Matrix, though there is a cautionary note that there's a lot of TODOs to fill still.

We hope to have even more news next week, but as a reminder: The IETF process is fairly slow-moving as it takes a lot of time to get through the different stages. Keep an eye on MSCs tagged "IETF" or "MIMI" - or watch this space - for updates on how it's going 🙂

This MSC attempts to be an addition to authenticated media in matrix (specifically MSC3916) where successful authentication would also be conditioned on whether or not the user was able to view an associated event in a Matrix room. In plain english, that means that if the media was sent in a room, then you'd need to be in that room to be able to see the media (even if you tried to load the media outside of a matrix client). This change helps address some concerns about media leaking outside of the room it was sent. It also opens up possibilities to delete media if all associated events have been redacted.

Check it out if you're interested in advancing media in Matrix! 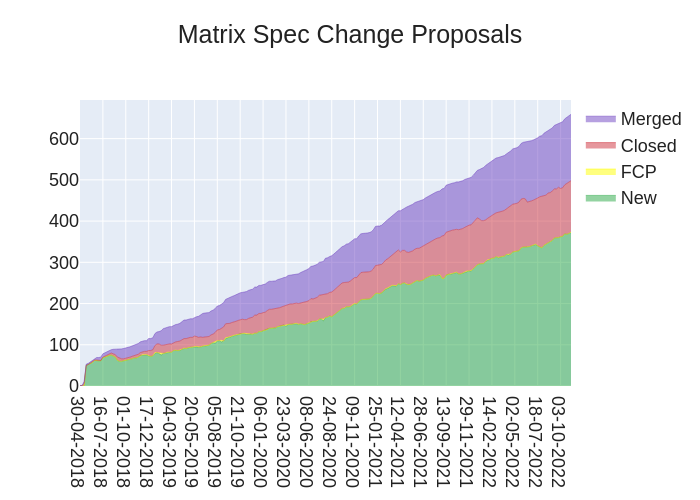 An open source Matrix homeserver implementation written from scratch in ANSI C and designed to be lightweight and simple, yet functional

Telodendria is moving along slowly but steadily. Here are a few brief things to note for this week:

Welcome to another Friday! Here in Synapse-land we have been hard at work on this week's release candidate: v1.71.0rc2. It contains bugfixes, a few new features, and continued work on speeding up Synapse. Some notable elements are:

Announcing the first alpha release of Swiclops, a server that handles authentication, registration, and other user management tasks for a Matrix homeserver like Synapse.

Swiclops can be configured to provide user-interactive authentication (UIA) on the Matrix /login endpoint, similar to MSC2835. This opens up many exciting possibilities for the future, including:

The easiest way to install Swiclops is by using Ansible and Docker. We have created an Ansible role for it in a fork of the popular matrix-docker-ansible-deploy playbook.

We wouldn't ordinarily make so many releases in one week, but we've been quite busy! Instead of including the entire set of changelogs, please see the releases below which have more details about what's changed:

If you have a Dendrite homeserver, staying up-to-date is highly recommended so please upgrade when you can. Otherwise, if you want to play with Dendrite without having to set up your own infrastructure, the dendrite.matrix.org homeserver is open for registration (upon completion of a CAPTCHA, so you may need to register using Element Web).

As always, please feel free to join us in #dendrite:matrix.org for related discussion.

This week has been quite calm, only a single update to my Helm Charts; element-web being bumped to 1.11.13

There's been an effort to make the app chat agnostic through the abstraction of a chat engine, this could allow different chat protocols to be used or simply swap out matrix SDK implementations (like the matrix-rust-sdk!)

More information over at Github & #small-talk

A Minimal, simple, multi-platform chat client for the Matrix protocol.

The main improvement in this release is the added support for the .well-known API call, which allows to register and login on homeservers using a base domain URL.

Also, the displaying of redacted and edited messages has been improved.

I started testing Quadrix on the Conduit server implementation (thanks to @timo:conduit.rs for a test account on conduit.rs) and noticed right away some major issues. A few fixes are already included in this release.

Finally, for PinePhone users, the Ozone/Wayland switch has now been disabled in the flatpak build for Phosh, because of a compatibility issue between Electron and the on-screen keyboard. On Phosh, the app now runs in XWayland mode (it looks blurry) but at least the OSK works.

Please leave feedback/comments at #quadrix:matrix.org or in the issues at https://github.com/alariej/quadrix (stars welcome :-)

You can now respond to notifications on macOS in nheko! These will be sent as a rich reply. No need to open up the main client any more to respond to folks. 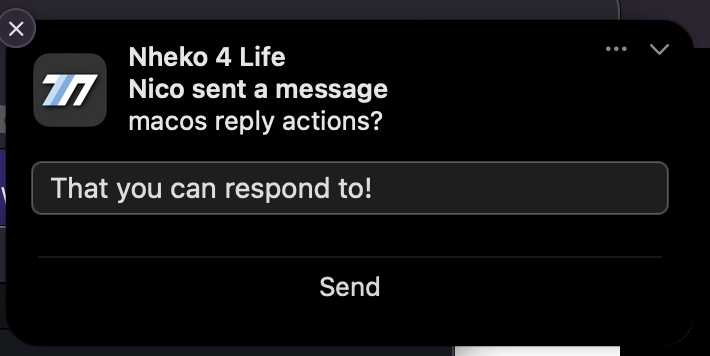 Additionally we fixed the pagination issues in our search and you should now be able to find more messages. As part of that we also optimized a few database queries again to reduce disk load when running Nheko (which became more noticeable after we enabled some durability flags on the database last week).

There have also been more fixes to the pushrules code. Test code now outnumbers the actual implementation by 4:1. As an additional feature, we do highlight messages marked as "highlight" via a pushrule (i.e. when someone mentions you) in the timeline by adding a red outline.

As part of the push work I also implemented and fixed a few things in Synapse related to pushrules. If replies are not highlighted for you currently, it might be this bug. A longer term fix will be MSC3664, which I also implemented. I also fixed some compatibility issues when sending pushrules to clients after the recent Synapse refactoring.

Circles is a secure, E2E encrypted social network app built on Matrix. We have a new build (v1.0.6) of our Android beta today.

Circles v1.0.6 is now available from our beta F-Droid repo, so F-Droid users' clients should start picking it up over the next day or so. Updates in this release include:

Adventurous users can also install the latest build by grabbing the APK directly from our repo.

Interested users can also join us in #circles:matrix.org to get the latest news about the app.

Hello from Nordeck 👋 This week we finally released the first of our widgets as open source: It's the matrix-poll-widget.

The widget allows to conduct polls in Matrix rooms. But unlike MSC3381 it is designed for more complex scenarios, like polls with multiple parties in a council. You have full control over your data, as it's stored in your Matrix room. It is currently in use in the German public sector. The widget is built using TypeScript, React, and the matrix-widget-api. We also extracted a thin layer of code that is shared between our widgets into our matrix-widget-toolkit, another project we made open source recently. Our remaining widgets will follow in the next couple of weeks. We keep you updated here.

If you have any questions, reach out to us at our #nordeck:matrix.org.

Hello from the VoIP team,

We've just released Element Call v0.3.2 which has a whole collection of new things. Screen sharing will now work in embedded mode on desktop and it will now show tiles for people it's trying to connect to, so it should make it easier to see what's going wrong in a call. Please continue rageshaking if you see failures: ideally immediately after the failure, from both sides, and please describe what went wrong in as much detail as you can!

We released Trixnity 3.0.0-beta1. This is a major version with many (breaking) changes. We will wait for the 3.0.0 release until we have implemented the Matrix 1.4 spec changes (m.replace will be really hacky due to a - in my opinion - spec bug).

We now support realm as a database backend. This allows you to use Trixnity on iOS with a persistent database.

Media is not saved into the database anymore, but in an exchangeable MediaStore. It is also streamed, so you can download and upload large files. There is trixnity-client-media-okio for a multiplatform file based implementation.

The StateFlowCache, which basically is a reactive cache on top of an arbitrary database does not need a CoroutineScope parameter for any read or write operation anymore. It was needed to react to the lifecycle of the consumer, so that not used data could be removed from the cache. This was really error prone, because if the consumer passed a wrong CoroutineScope with a too long lifecycle, the cache could grow unlimited. We figured out to solve this with Kotlin Flows, so everything is lazy and the lifecycle can be determined from the Flow consumer!

We also fixed a long standing bug, which could cause to return a Flow, which does not emit updated values.

Naming change of classes and interfaces

We made some improvements to the various server APIs to allow implementing proxies filtering requests and responses.

SeaGL (the Seattle GNU/Linux Conference) will be holding our tenth annual (third virtual) conference online November 4–5, powered by Matrix and our custom bot, Patch. Join this free—as in freedom and tea—volunteer powered grassroots technical summit, no registration required. This year's theme is "Hang Ten”, in honor of our tenth year!

We have a packed lineup of free / libre / open source talks. There are also a number of fun social activities providing opportunities to mingle with your fellow participants. Additional information on the conference and how to attend is available on our blog.

As previously mentioned, we've been refining the virtual conference experience for three years and would gladly welcome new wings and beaks to our all-volunteer staff!