A few Matrix folks went to IETF115 this week, and here is my Trip Report: Can Matrix help messaging standardisation through MIMI?

This week the Spec Core Team has been working with the IETF More Instant Messaging Interoperability (MIMI) working group to define a charter. With a charter, the working group is able to start thinking about implementation and design details, which means talking even more about Matrix!

We had the opportunity to discuss Matrix with several interested people at IETF this week, and are extremely excited for the (long) road ahead: even in the event where Matrix doesn't get accepted, we hope the protocol(s) the working group publishes will be fit for purpose and adopted widely (not to mention our own spec will be better as a result).

To find out more about what we're doing in this space or to learn more, check out this week's Matrix Live above!

Polls! They are useful for quickly gauging whether a group of people agree, or entirely disagree on a topic or choice. This is an MSC with a fairly long history, but has received experimental implementation in a small number of Matrix clients. The concept uses Extensible Events, and there are plans to rewrite it off the back of changes in MSC1767 (extensible events). But for now, it works and is a fun feature.

It's likely worth waiting for the rewrite before commenting on the MSC with detailed changes, but otherwise feel free to have a read to see how it currently works! 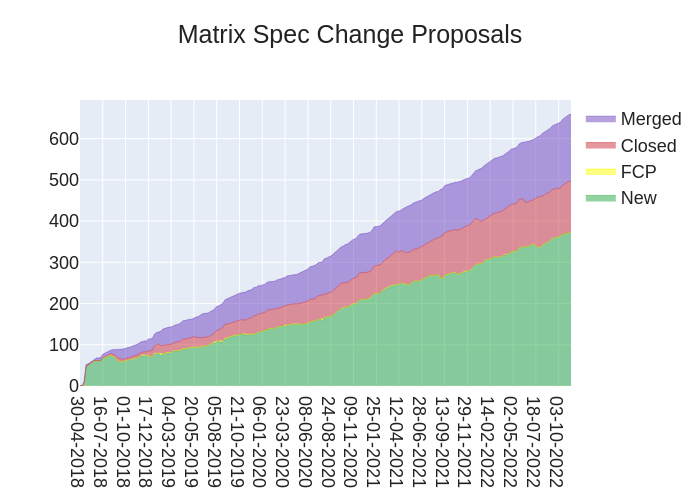 Feta is a Matrix server distribution for the Raspberry Pi 3 and 4.

It is a an operating system image, based on Raspberry Pi OS Lite and includes the Matrix Synapse server, a self-hosted Element client, Postgres database, and it generates an SSL certificate for your domain using Certbot. The coturn TURN server is also included so voice and video calls work without any additional configuration.

The provided setup script will have your server up and running in a matter of minutes.

All you need to do is configure your DNS settings for your domain, forward some ports through your router, and boot up your Raspberry Pi. Once setup is complete, enjoy your new Matrix server! Synapse, Element, Postgres, coturn, and federation are all preconfigured for you.

Head on over to #feta:matrix.org for discussion and updates!

An open source Matrix homeserver implementation written from scratch in ANSI C and designed to be lightweight and simple, yet functional

Synapse 1.71.0 has been released! It contains the usual round of bugfixes and performance improvements, plus some new features. Notably, Synapse now supports:

Server administrators should be aware that:

You can read more about v1.71.0 here: https://github.com/matrix-org/synapse/releases

In the mean time, the team has been working on the remaining parts of faster room joins.

Yep, no pinned release yet, but there are some exciting features in the main branch (latest docker image):

the last planned feature of the roadmap: send reply (reply-to or thread reply) to an email message in the matrix room and it will automatically set all magic stuff (In-Reply-To header, subject with Re: %original message's subject%, etc) and send email. It's pretty rough implementation, so feedback is appreciated!

Source code and say hi in the #postmoogle:etke.cc room

Released v0.3.4 (and v0.3.3) with a join room UI and lots of bug fixes! Special thanks to Isaiah Becker-Mayer for his numerous typescript PRs!

Some of the fixes are for:

This version brings a few improvements.

The sending of video messages has been added. The following handler will send a video after any message from another user:

Thanks to moanos and HarHarLinks, there are improvements to the handling of device ids.

A set of Rust library crates for working with the Matrix protocol. Ruma’s approach to Matrix emphasizes correctness, security, stability and performance.

Since our last update in June (yeah, sorry...), we released Ruma 0.7.0 and a few patch releases including all of the following and more:

Since this release was released back in September, a bunch of things have also happened that are not released yet:

This week has seen important strives forward on sliding sync, which now has a PR up for offline support and the new timeline API, with some initial unittests and video messages support merged and support for file messages coming up. On the FFI, we now have support for logging in Android and work on moving the iOS binding scripts into our internal xtask cli.

As usual a lot of work is been going in the background without any visible, tangible outcome yet. On one side we are making great progress on getting a first async-prototype for uniffi with python working, on the other we have been profiling the sdk on iOS mobile devices for its memory footprint - which is a major blocker for notification support.

Using this Lua script and NodeJS bot, you can remotely control any GameBoy (Classic + Color + Advance) game using the mGBA emulator. Invite some friends to the Matrix room and everyone can control the game at once. Yes, the project name is a reference to the famous "Twitch Plays Pokémon" stream which has 1000s of people complete Pokémon games together just by typing into a chat.

This is a bot and does not need an AppService registration.

Disclaimer: This is a hobby project of mine. It is neither associated with nor endorsed by my employer or Nintendo. The project does not contain ROMs or other non-free assets.