While not as feature-packed as previous releases (v1.5 was intended as a maintenance release), it's still worth checking out! Included are two new MSCs that have landed, as well as loads of little bugfixes and clarifications to the spec text itself. Thanks to all who helped fix issues since v1.4!

See the Matrix v1.5 blog post for all the juicy details.

Extensible Events are Shaping Up!

As may be apparent from the new MSCs this week, the SCT has been looking at extensible events to iron out some of the finer details of the system. They're not necessarily in the best position to review at the moment, but keep an eye on this space for when review would be most welcome 🙂

The random MSC of the week is... MSC2705: Animated thumbnails for media (and thumbnail content-type requirements)!

This MSC attempts to define a method for clients to indicate to their homeserver that they would like to have animated version if possible when requesting a thumbnail of some media. This would allow clients to provide a toggle to the user for whether media in the timeline should be animated, or whether room and user avatars should be animated, etc. Potentially separate options for each!

Today, there is no way for the client to indicate per-request whether they would like to receive an animated version of a thumbnail. This leaves the choice up to the homeserver, which gives individual users much less control.

The MSC also defines mimetypes that animated thumbnails should return. And it has an implementation in matrix-media-repo!

Check it out if animated avatars/thumbnails peaks your interest. 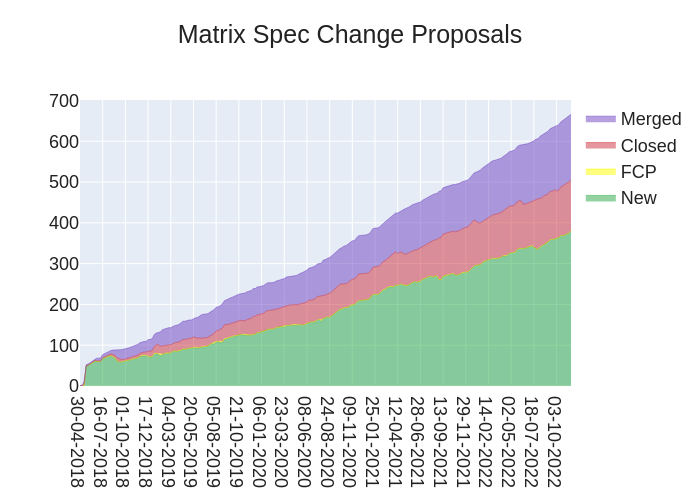 Another week has gone by and we here at Synapse Inc have been working hard on faster room joins, bugfixes, and other fun items to make Synapse faster and better, in addition to releasing v1.72.0rc1. Just a few highlights of the release are:

In addition, please note that we now only support PostgreSQL 11+, as PostgreSQL 10 has reached end-of-life. As always, if you'd like to know more about this release, hop on over to the release page (https://github.com/matrix-org/synapse/releases) and take a look!

It's been a few weeks since the last update on NeoChat and we've been working hard on bringing new features and fixes. Some notable ones include:

FluffyChat 1.7.0 has been released. It features a new way to work with spaces via a bottom navigation bar. A lot of work has also been done under the hood to make the app faster and more stable. The main color has slightly changed and the design got some finetuning. Please be aware that it can take some time until it receives all app stores. The Snap Store currently waits for a review, while the arm64 version of Flatpak has recently failed to build. Read the full changelog here: https://gitlab.com/famedly/fluffychat/-/blob/main/CHANGELOG.md

Ement.el, a Matrix client for the GNU Emacs text editor and Lisp environment, has been updated to v0.5. Since the last version announced in TWIM, these improvements have been made:

Feel free to join us in #ement.el:matrix.org!

Since our last update, Populus viewer has added two features, both a bit overdue:

Our server (at populus.open-tower.com) has also been rebuilt and reconfigured a bit, and will likely be converted from a test-bed to a stable home for annotation-based discussions in the coming weeks. As always, if you want to give us feedback, keep track of progress, or talk about the future of social annotation on Matrix, join us at #opentower:matrix.org!

As many of you know, we are working on using MLS, an upcoming IETF standard for end-to-end encryption, in Matrix. We've set up a page, Are We MLS Yet to track the progress of this project.

Elm is a functional programming language that compiles to JavaScript with the promise that their generated JS code will NEVER raise any runtime errors and show high performance.

Despite the fact that certain implementations like Cactus Chat already use Elm, I could not find an SDK for it. That's why I've started to write one: https://git.noordstar.me/bram/Elm-Matrix

The SDK is currently in early development. The /v3/sync endpoint is functional and there are already a few other ways to interact with the API, so the repository can already be tested by developers who are familiar with Elm. If you aren't that familiar with the language, it is better to wait until I release the first complete version.

Purism has been chipping away at libcmatrix for their chat app: https://puri.sm/posts/toward-matrix-support-in-chats/

Trinity is an experimental bot framework written in Rust and using matrix-rust-sdk, as well as commands / modules compiled to WebAssembly, with convenient developer features like modules hot-reload.

If you're interested to follow the project, feel free to join our Matrix room or get the code on Github.

Major breakthroughs have happened behind the scenes this week: we were able to get a simple python3-asyncio to poll our rust-side future and receive its result via uniffi. While there isn't much to show for the outside world, this is a major step towards having async-uniffi. The team is super excited about this development.

Meanwhile in Sliding-Sync-Land, we have debugged the session reset and added transparent session recovery to the offline-caching PR. Together with the latest PR that hands over the already received timeline events to the new Timeline API, this should visibly speed up things and improve overall performance across all major clients using both of these. Further more, the Timeline API has UTD decryption retry support now. The client interfaces are moving ahead fast.

On the always-on-going-improvement-front, we have upgraded to ruma, merged the component generation for swift in xtask, switched to custom cargo build profiles, have a signaling mutex for crypto now, moved large parts of deserialized_responses to matrix-sdk-base and made the sync_token accessor private.

A few weeks ago I started experimenting with extending my moderation tools with a basic ML model that can give me early warnings on common spam.

As a result https://github.com/MTRNord/matrix-spam-ml was made. It contains a basic ML model using tensorflow based on telegram spam from matrix and a standard SMS dataset. It provides a HTTP api which can also be found at https://spam.midnightthoughts.space and a Synapse and mjolnir integration for both sampling training data and using it as automated spam reactions and is planned for the future.

Feel free to hop by in #matrix-spam-ml:midnightthoughts.space for any further questions :) also please note that the repo is using LFS and as it contains trained models it is pretty huge when cloning with LFS data.

axon.sh version 0.22.0 has been released, adding support for retrieving event reports from your homeserver, and looking up local users by third-party ID (requires Synapse 1.72.0rc1 or later). Please try it out and report your experience in #axon:matrix.thisisjoes.site!

We have a physical devroom on Sunday 5 morning, and will follow with details for the online devroom as soon as we get them! You can read the CfP for the physical devroom here: https://matrix.org/blog/2022/11/16/call-for-participation-for-the-fosdem-2023-matrix-devroom

Last week's TWIM presented a GBA emulator that was written and implemented in JavaScript. Due to some obscure Rust dependencies that weren't compatible with my server setup, I decided to rewrite the program in Python.

The Python implementation can be found at bram/pyboy-to-matrix. It only supports GameBoy games (no GBA), but it only needs one process (or Docker container) to run both the emulator and the Matrix bot.

If you're unfamiliar with last week's post, the GameBoy emulator is a program that emulates games and then interacts with you on Matrix. You can send commands and the emulator will show you what happened in the game.

Send me a DM at @bram:noordstar.me if you want to see a live demo. 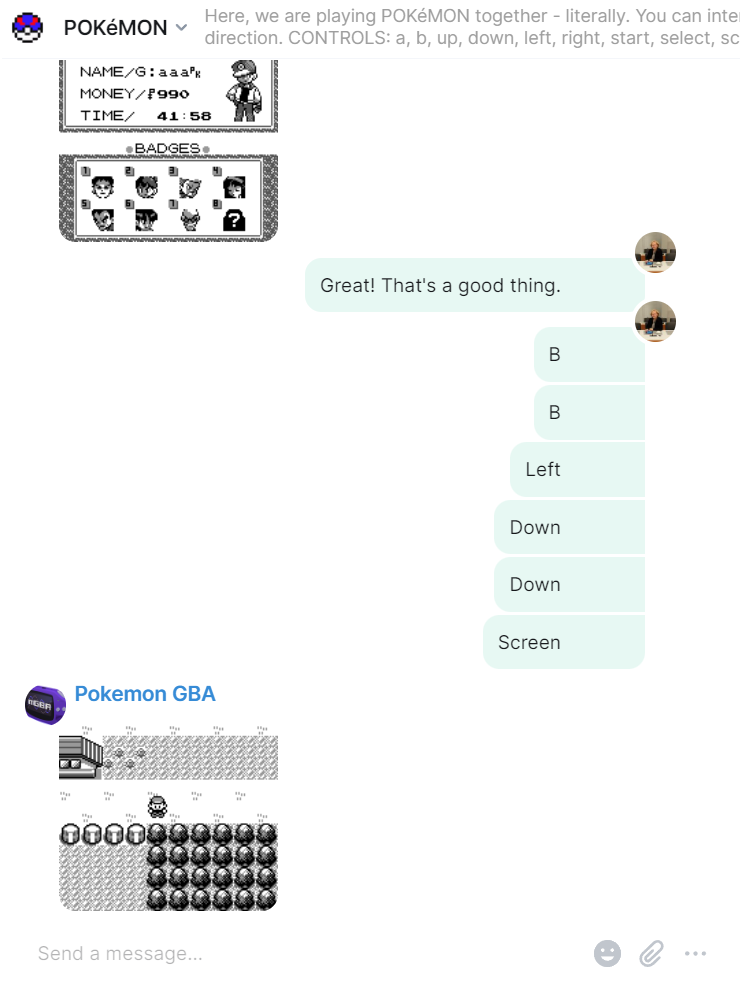